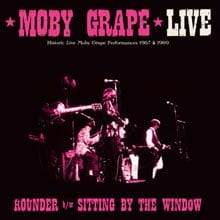 Saturday is National Record Store Day, so stop downloading for a few hours, turn off your computer and go out and support your fave vinyl or CD bricks ‘n’ mortar shop.

Let’s face, record stores are disappearing mighty fast these days. I know. I used to work at a couple of Nippertown’s finest indie record stores. Remember Just A Song in Albany and Records ‘N Such in Stuyvesant Plaza? I love record stores, and we’re betting that you do, too. After all, you are reading Nippertown.com…

Lots of record companies both big and small are releasing special, limited edition discs in honor of Record Store Day. Coxsackie’s own Sundazed Music, for example, is releasing a special seven-inch, colored vinyl single of Moby Grape’s “Rounder” backed with a previously unreleased version of “Sitting by the Window,” available only on the single. Only 2,000 copies have been pressed, making this a real collector’s item. (“Rounder” will be included on Sundazed’s upcoming album release, “Live” by Moby Grape.)

Hopefully, you’ve still got a favorite record store that you frequent, but if not, may we make a few suggestions?