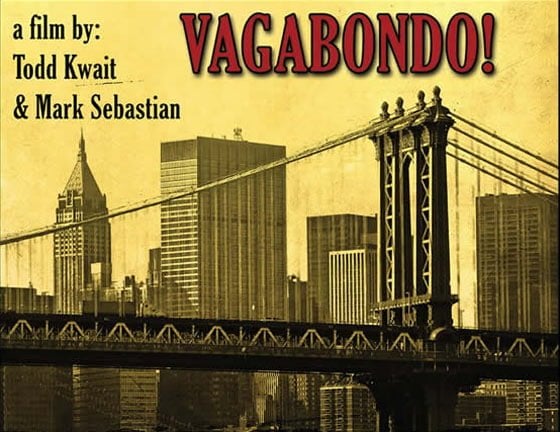 Vince Martin – one of the great, unsung singer-songwriters of the ’60s folk explosion – is probably best known today for “Tear Down the Walls,” an album that he recorded with fellow singer-songwriter Fred Neil in 1964.

But now – more than 45 years later – Martin is also the subject of the new documentary film, “Vagabondo!”

The film is by Mark Sebastian – yes, the brother of John Sebastian and a singer-songwriter in his own right (Sundazed Music re-released his 1999 album “Bleecker Street” just last year) – and Todd Kwait, who also directed the marvelous documentary film, “Chasin’ Gus’ Ghost,” which chronicles the history of jug band music.

Sebastian – who co-wrote the Lovin’ Spoonful’s only No. 1 hit song, “Summer in the City” with his brother John – says that the hour-long “Vagabondo!” film is “basically me walking around the Village, Brooklyn and Coney Island with Vince. He tells great stories, especially during a formal interview I did for the film.”

The film will be given a “sneak-preview” screening at the Kleinert James Arts Center in Woodstock at 2pm on Sunday. Admission is free. Mark Sebastian and Vince Martin are both scheduled to be in attendance at the screening.

So why make a film about about a ’60s folk musician who never really achieved stardom even in his day, and is nearly forgotten in the 21st century?

By making the film, Sebastian is acknowledging a big debt and in a way, paying back Martin for his early support in Sebastian’s musical career. “He gave me a huge break,” Sebastian recalls, “letting me play guitar behind him when I was 18 and just beginning to play clubs in the Village.”

In addition to the interviews and chat, the film also includes concert footage of Martin performing at NYC’s Lower East Side hotspot Banjo Jim’s just months ago, as well as vintage audio excerpts from his late-60s and early-70s recordings on Capitol Records.

“Martin isn’t your dad’s folksinger. He isn’t Pete Seeger,” Sebastian explains. “He made basically zilch from his records but isn’t bitter or vengeful. I adore him, pure & simple! He is a pisser!”