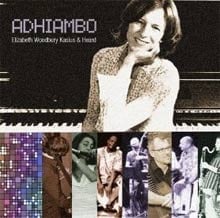 Pianist-composer Elizabeth Woodbury Kasius has been exploring the fascinating hybrid of jazz, classical and world music for years, having made her debut as the lead of Jupiter Circle nearly a decade ago.

This 20-minute, four-song EP continues down that same path with sparkling results, as she leads her latest ensemble Heard – featuring clarinetist Jonathan Greene, bassist John Menegon and the percussion tandem of Brian Melick and Zorkie Nelson.

Woodbury Kasius describes the quintet’s sound as “new world jazz,” and the first three tracks delve into the world of Afro-Brazilian music of gently percolating, swaying rhythms and breezy, sun-kissed melodies. Woodbury Kasius handles the vocal chores on the title track, while Nelson takes over the microphone for “O Fecha.” The third selection, “Malakia Mlongo,” is a lilting instrumental.

The disc’s closing track, “La Lluvia,” is also an instrumental, but a bit of a curve ball. Recorded by Woodbury Kasius with cellist Jeffrey Parker and flutist Rebecca Kleinmann rather than Heard, the trio slides into a more contemplative mood with the musical emphasis leaning more toward the classical end of the musical spectrum. It’s a beautiful, meditative composition and marvelously played, but it sounds a bit off the path in the context of the other three tracks on the disc. Perhaps in the context of a longer, full-length release, the track wouldn’t pull focus quite as much as it does here.

Elizabeth Woodbury Kasius & Heard will be performing a free lunchtime concert at 12noon on Tuesday (April 20) at St. Paul’s Church in Troy. The ensemble is also scheduled to play at Justin’s in Albany at 9:30pm on Friday, April 30. Admission is $5.