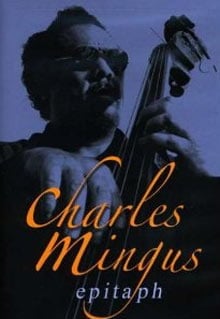 Today marks the 88th anniversary of the birth of the great jazz composer and bassist Charles Mingus. In his honor, here’s a review of the DVD “Charles Mingus’ Epitaph,” released by Eagle Eye Media last year:

He got the short end of the stick in Ken Burns’ PBS series “Jazz,” which too many people consider to be the defining history of the musical genre.

But Charles Mingus was not only one of the greatest American composers in jazz history. He was also – to put it bluntly – a force of nature. So it’s difficult to know just where to begin with “Epitaph,” a mindbogglingly ambitious work that Mingus intended would sum up his vast musical talent as well as his long and varied career.

After Mingus died in 1979, “Epitaph” was assembled and painstakingly restored to its intended splendor. Ten long years after his death, the work was finally performed at the Alice Tully Hall at New York City’s Lincoln Center on June 3, 1989. The New York Times described it as “one of the most memorable jazz events of the decade.”

Now two decades after that, the very same performance of “Epitaph” is finally available on DVD for the first time in all of its epic glory. And I don’t use the phrase “epic glory” lightly.

Quite simply, it was the jazz world’s equivalent of the 1992 U.S. Olympic Dream Team basketball team.

A 500+-page manuscript, the composition itself is a sprawling masterwork that stretches on for more than two hours in performance and was – at least at the time – the longest and largest piece ever composed for jazz orchestra. It features 18 movements, some sections of which were composed back in the 1950’s.

And surprisingly enough, the music never flags. There are no interludes where Mingus was “coasting,” compositionally speaking. The work is thoroughly gutsy and powerful, punctuated by atonal explorations and delicious dissonance, although sections are undeniably lyrical. Like much of Mingus’ work, it is deeply rooted in the bedrock of traditional American music, using blues, gospel and folk music as touchstones, source material and inspiration.

Like Gershwin and especially Ellington, Mingus had the rare ability to fuse together classical forms and improvisational jazz in a manner that never short-changed either end of the musical spectrum.

Mingus drew on a wealth of material for the overwhelming “Epitaph,” including not only some of his best known compositions – most notably the rousing, raucous “Better Get It in Your Soul” – but even Jelly Roll Morton’s iconic “Wolverine Blues,” as well. In the segment “O.P.,” the bassmaster pays tribute to another inspiration – Oscar Pettiford.

The music bears the unquestionable mark of genius. And the sound and camerawork on this DVD are excellent. About the only thing that’s missing here are some bonus features – any bonus features. Perhaps something to trace the history of the composition, or explore Mingus’ talents as a composer or most importantly, to offer some of the musicians the opportunity to tell a few anecdotes looking back at the experience of this performance and its context in jazz history.

But even without the benefit of any bonus features, this DVD is an essential document for any fan of jazz…or American music.