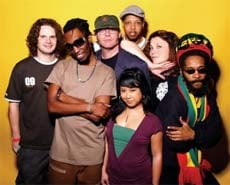 Those are the titles of albums by the Easy Star All-Stars, the reggae-ska-dub band that’s headed into Revolution Hall in Troy on Sunday evening.

And, yes, as you’ve already likely guessed, those albums pay tribute to the music of Pink Floyd, Radiohead and the Beatles, respectively, all imbued with a distinctive and delightful reggae spin.

The band was formed more than a dozen years ago by Easy Star co-founders Michael Goldwasser, Eric Smith and Lem Oppenheimer. They’re still at the helm, but over the years, the band has developed into a sprawling collective, featuring some of the finest reggae musicians around.

On Sunday at Rev Hall, the doors will open at 7pm, and Nippertown’s own veteran reggae torchbearers Dr. Jah and the Love Prophets will open the show.