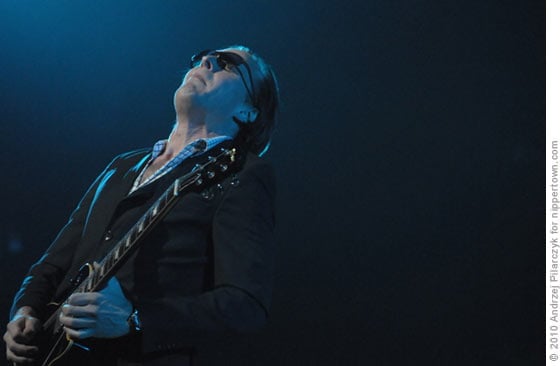 Electric guitarist Joe Bonamassa is no shredder. He is without a doubt a virtuoso on his chosen instrument who has carefully studied the styles of the best of the best to eventually become one of them.

Yes, there is a little Eric Clapton and Jimmy Page in there. Robin Trower and Peter Frampton, too. If you listen even deeper you’ll hear some Eric Johnson, Stevie Ray Vaughan and, of course, Jeff Beck. But when you stop searching for comparisons, you start to hear Joe Bonamassa. 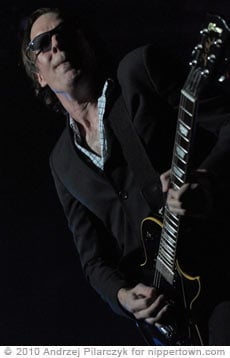 Barely breaking a sweat while wearing a suit and dark glasses, Bonamassa’s fingers did all the talking at The Egg, even though he sang quite passionately on most of the tunes. But from screaming string-bends to lightning-fast runs, his playing just burned and sizzled continuously, as song after song mesmerized the sold-out audience.

Drummer Bogie Bowles, bassist Carmine Rojas and keyboardist Rick Melick didn’t miss a beat, either, as they cooked behind him with all four burners set on high.

Bonamassa also offered a solo set-with-in-a-set of energetic acoustic guitar tunes, ranging from some Spanish flamenco-styled playing to iconic Mississippi back-porch blues. In fact, the foundation of Bonamassa’s awe-inspiring guitar style is built upon a rock-solid foundation of the blues.

Forget that as a pre-teen child prodigy, Bonamassa was opening shows for legendary B.B. King. Forget that as a young teen, he put together the somewhat gimmicky second generation band Bloodline with the sons of Berry Oakley, Miles Davis and Robby Krieger and toured them nationally.

Bonamassa, now 33 years old, has truly come into his own as a brilliant guitarist who has earned a place alongside the best on the international music scene. He’s been named Guitar Player’s Best Blues Guitarist three years in a row (2007–2009) and has sold out shows all over the world in such prestigious places as the Royal Albert Hall.

With the release of this year’s “Black Rock,” his tenth outing, Bonamassa has come full circle. B.B. King – the man he once opened up for so many years ago – is now sitting in with him as his special guest. It doesn’t get any better than that. Same with the concert last Tuesday!

An excerpt from David Singer’s review in The Daily Gazette: “Working with mostly originals, mostly blues-based, and all structured simply, the Utica native appears to take no prisoners. But in the end, he’s predictable – though good predictable. Bonamassa is the quintessential contemporary guitar hero, and knows that his audience came to see him ‘shred,’ so shred he did, sometimes mindlessly, sometimes beautifully, but never at great risk. Fortunately for his audience, his safe playing is mesmerizing.”