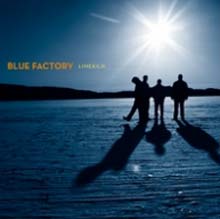 Roaring out of the wilds of Poestenkill, Blue Factory has built a strong, rock-solid musical foundation with their debut album, “Limekiln.”

At the core of the fearsome four-piece band are the brothers Crawley – Jim on vocals and guitar with Joe on drums. Veterans of such fave Nippertown bands from days gone by as Crawdad, Private Plain and the Brink, this time around the Crawleys are banging it out for the sheer fun of playing rock & roll – big, crunchy power chords, captivating, ear-tantalizing riffs and a walloping back-beat.

The Crawleys are joined by vocalist-guitarist Jim Temple (of Private Plain) and bassist Mike Hayes (of the Brink), making Blue Factory something of a family reunion.

The dozen original songs on “Limekiln” are brimming over with a churning intensity, and engineer/co-producer Barry Breckenridge (former drummer with Even the Odd) wisely avoids polishing things up too much.

It’s difficult to pigeon-hole the Blue Factory sound, and that’s OK. The band pretty much encapsulates their approach on “Yeller Song”:

There are punk-tinged ravers (most notably “Women’s Temperance Work”). There are hook-filled pop-rockers (highlighted by the opening “Traveller.” Then on the other hand, “Silver Pied Piper” leans a little more toward the Americana end of the music spectrum, with Jim Crawley huffing up some honkin’ Neil Young-ish harmonica.

And “Ferris Wheel” – my fave track from the disc – slips back and forth between nostalgic but not sentimental spoken-word and big, Cheap Trick-like arena rock strutting.

Blue Factory cranks it up at Valentine’s Music Hall in Albany for a special happy hour gig at 6pm on Friday. Sounds like the perfect way to cap off your work week…

Album Review: Holding Onto Something Good by Sabrina…