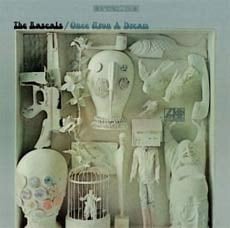 The Feast Gallery in Saratoga Springs opens a new one-person art exhibition on Friday, featuring the artwork of Dino Danelli.

Yes, that Dino Danelli. Drummer and co-founder of the Young Rascals. Later with Bulldog. Then Fotomaker. Then a long run in the drum chair with Little Steven & the Disciples of Soul. A member of the Rock and Roll Hall of Fame.

And an accomplished visual artist.

Danelli has been drawing and painting since 1965, and you’re probably already familiar with some of his visual artwork. He has won numerous awards over the years, including the prestigious Graphis International Design Award for his cover art of the Rascals’ 1968 album, “Once Upon A Dream.”

These days, Danelli is drumming with the New Rascals (which also features co-founding Young Rascals guitarist Gene Cornish), as well as exhibiting his expansive catalog of artwork in galleries throughout the U.S.

His exhibition at the Feast Gallery will be on view for two months, and the opening reception with the artist will take place from 5-8pm on Friday. It is open to the public, and admission is free.