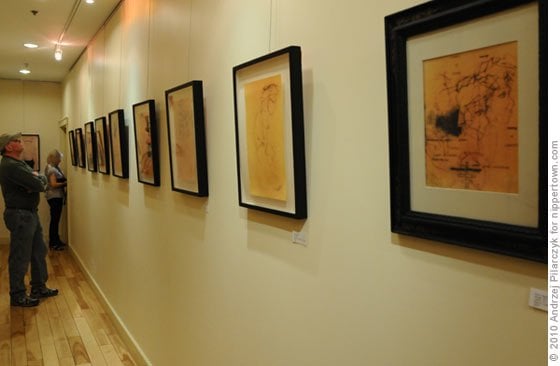 But in addition to his considerable skills behind the drums, Danelli is also quite an accomplished artist, as he proves with his one-person exhibition, “Mean Streets,” which opened on Friday at the Feast Gallery in Saratoga Springs. 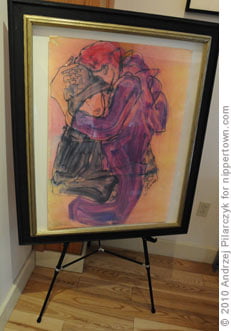 “Yeah, I’ve been drawing and making art since I was in high school, but I never really had time to do much with it because I was always on the road touring with the band,” Danelli explained at the opening reception.

Focusing primarily on portraits of street people, the exhibition features more than two dozen drawings and prints based on his drawings.

“I started some of these drawings more than 20 years ago, but it’s only been recently that I’ve got them out again and started reworking them – painting them and doing some more drawing on some of them,” he explained. “Then I decided to re-size them and make prints of them. I’d never done printmaking before.”

Until now, he’d never had a one-person exhibition of his work, either. “I’ve done a number of group shows before that featured one or two of my pieces,” he said, “but I’ve never had the opportunity before to exhibit the whole portfolio as a body of work. This is my first one-man show.”

The opening reception came just one week after the original Rascals reunited to play a benefit concert for the Kristen Ann Carr Fund at Robert De Niro’s Tribeca Grill in NYC.

The Rascals’ guitarist Gene Cornish also was in attendance for Danelli’s opening reception at the second-floor gallery in Saratoga Springs. Little Steven Van Zandt – whose band the Disciples of Soul featured Danelli on drums – sent along a flower arrangement to the Feast – in the shape of a drum kit.

There will be a second reception for “Mean Streets” from 5-8pm on Saturday, June 5, in conjunction with Saratoga Springs’ monthly First Saturday Arts Night. The exhibition remains on view through Wednesday, June 30.

A Farewell from Faust?