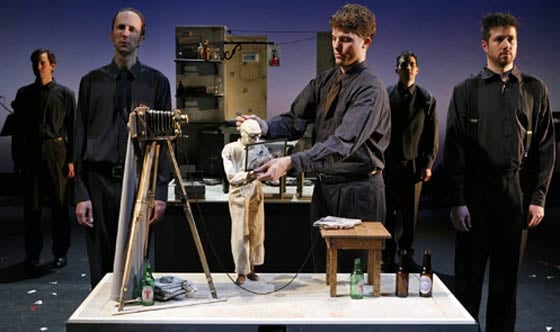 For years, locals and tourists lined up to have their picture made. Disfarmer used glass plate photography long after it was obsolete; when thousands of these glass plates were discovered in the 1970s, his photographs were acknowledged as a stunning achievement for their exquisite artistry, their profound empathy for their subjects and their invaluable documentation of a way of life that has all but vanished.

At 7pm Thursday, artist-puppeteer Dan Hurlin will also be joined by local historian Joe Manning for a discussion at Club B-10 in MASS MoCA. The conversation will focus on the importance of the growing availability of digitized historic photographs, and how various artists and historians are using these types of photos in their work. Admission to the discussion is free.

Performances of “Disfarmer” are at 8pm Saturday and 3pm Sunday at the Hunter Center at MASS MoCA, North Adams. Tix are $19 in advance; $24 on the day of performance. Priority seating is $29; students $10.

Robert Dubac’s The Male Intellect: An Oxymoron? On Sale Sunday

Robert Dubac’s The Male Intellect: An Oxymoron? On…