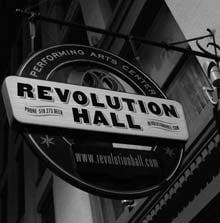 The folks at Revolution Hall have announced that they’ll be screening movies for the first few Thursdays in May. They’re calling it the Mid-Brow Film Festival, and they’ll be showing movies that walk the line between cult status and popular film – movies like the Cohen Brothers’ “The Big Lebowski” (May 6), Quentin Tarantino’s “Reservoir Dogs” (May 13) and Tony Scott’s “True Romance” (May 20).

Not big box office blockbusters, but hardly rare or obscure stuff. Rev Hall describes them as “several of the finest oddball films in recent years.” The press release goes on to explain, “The selected works were chosen for their quirky entertainment value, as well as their compatibility with drinking great beer and throwing peanut shells on the floor.” OK, at least they’re honest in their criteria.

Showtime for the films is 8pm, and tix are $5. Guests that dress in costume appropriate to the movie will receive a discount on pints of Brown’s Pale Ale. (Not sure who gets to make the judgment call on that one. The bartenders? Heck, half the folks we see at every Rev Hall show look like they idolize The Dude.) Peanuts and popcorn will also be sold.

Rev Hall is obviously trying to do something different. And maybe it will work. I hope so, because we certainly wouldn’t want to see the club go down the tubes. But it still seems a shame that the best club venue in the Capital Region seems to be steering away from an emphasis on live music.

Here’s a list of live music shows at Rev Hall for last month compared to April bookings during the two previous years:

And don’t forget that the lovely Margo Timmins and Cowboy Junkies ride into Rev Hall on Friday night. Lee Harvey Osmond opens. Doors open at 7pm. Tix are $27 in advance; $30 at the door.