Colin Hay, What Was the First Album You Ever Bought? 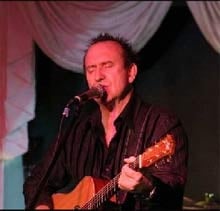 “To be honest with you, when I was young my mother and father owned a music store in Scotland, so I don’t really remember ever actually buying any records. I just remember playing them in the store.

Apart from the Beatles, which was really an obvious thing, the first song that had a really big impact on me was ‘You Really Got Me.’ I always loved the Kinks. And for its time, the sound on that record was pretty remarkable. I remember listening to that record and thinking to myself, ‘My God, that’s a whole different world.’

As far as albums go, my tastes were pretty normal. I loved Jimi Hendrix, and I loved the Beatles, obviously. I liked Traffic and Pink Floyd. I just can’t remember the first album that I ever bought, but I’ll always remember loving that Blind Faith album. That was an album that I really thought was fantastic. They only made that one album, but it was a great record.”

Former Men at Work frontman Colin Hay returns to Nippertown for a solo acoustic concert at The Egg in Albany at 8pm on Saturday. Tix are $24.