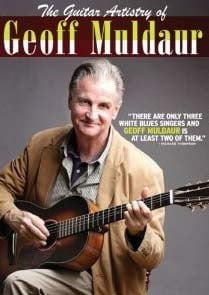 Usually music instruction videos are a little dry for anyone without an instrument in their hands and ambition to spare. Even if the film features a favorite performer, patience can be taxed as they break down not only a song, but also the bits of a song – sometimes going over a passage, a phrase or a lick half a dozen times to parse its construction and intent.

Geoff Muldaur’s lovely “Innovative Arrangements for American Blues/Roots Guitar,” released in 2000 by Homespun Video is just such a geeks-only excursion.

Not so Vestapol’s new disc, “The Guitar Artistry of Geoff Muldaur.”

Instead, “Artistry” is like a personal audience with Muldaur, in which he traces his own impossibly deep roots as well as those of the seminal Jim Kweskin & the Jug Band (of which Muldaur was a founding member).

This is an entertainment any fan can enjoy.

In the early ’60s, Muldaur spent time in New Orleans and was also deeply ensconced in the Cambridge folk scene. Through those connections he learned from the masters he loves, and, to hear him tell it, he smoked a little funny stuff with them, too.

In a story familiar to fans who’ve seen Muldaur live, he recounts Hurt bogarting a joint at a Cambridge party and slyly telling his young friend, “Down south, we love pot, but when we get some money, we buy gin!”

Without intending to, Muldaur followed in the footsteps of his heroes, at one point taking 17 years off from live performance. His re-entry (as a solo artist) isn’t draped in the melodrama of some young, wide-eyed kid searching him out and bringing him to the big city, but the music he has produced since his return is the equivalent of any of the giants that initially inspired him.

Muldaur actually talks fairly little about his playing style in “Artistry,” other than to note that he fancies himself an arranger who plays guitar more than he views himself as a “guitarist.” Still, his custom model Martin sounds like a little orchestra in his hands, especially when he’s applying a Spinners’ groove to Blind Willie Johnson’s “Trouble Soon Be Over.”

Other standouts include his haunting recasting of Vera Hall’s “Wild Ox Moan,” a perfect “Fishin’ Blues” and his simple yet powerful original “Got To Find Blind Lemon – Part One.”

Muldaur has recently re-teamed with his old bandmate Kweskin, and the two have been hitting the road. Their travels will bring them to Caffe Lena in Saratoga Springs on Friday, May 21 as part of the famed coffeehouse’s 50th anniversary festivities.

This will have to do ’til then.