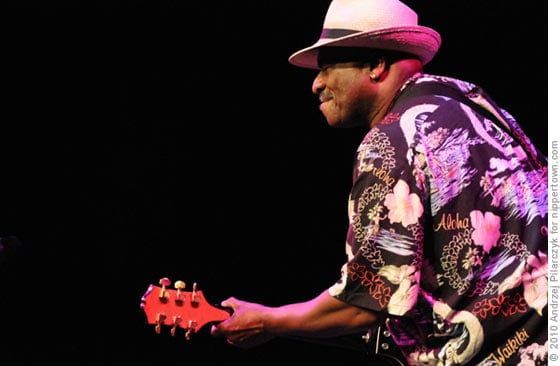 It was a family affair at The Egg on Thursday.

Sure, legendary bluesman Taj Mahal was the headliner, and he delivered the goods – a heaping batch of feel-good blues spiked with African and Caribbean influences. But Fredericks Brown – a soulful quintet featuring Taj’s daughters Deva and Zoey Mahal at the microphone – served up an equally tasty performance of their own to open the show.

Taj Mahal has been doing his thang now for more than four decades, and he knows how to do it right. On Thursday, he stuck almost exclusively to the guitar – though he played Little Walter’s “Blues With a Feeling” at the piano, and a foray into “Roscoe’s Mule” on banjo was aborted when he broke a string – and his prowess on the six-string was never in doubt.

Backed by the stalwart and stationary rhythm section of bassist Bill Rich and drummer Kester Smith, Mahal was free to wrangle his guitar around the slow blues grind of “Annie Mae,” the Afro-pop inspired instrumental “Zanzibar” and the percolating “Lindy Lu.”

He’s a charming entertainer, as well as an accomplished musician, and he offered a number of crowd-pleasing old favorites – “Fishin’ Blues,” “Corrina” and “Take a Giant Step.”

By the end of his 90-minute concert, he was leading the crowd in a call-and-response chant of “Hey, Hey, the blues is alright,” and nobody in the theater disagreed.

When Taj returned to the stage for an encore, the audience sang to him – a rousing chorus of “Happy Birthday.” His daughters Deva and Zoey Mahal joined him for the encore “Lovin’ in My Daddy’s Eyes” (a slight reworking of Taj’s lilting Caribbean blues “Lovin’ in My Baby’s Eyes”).

The two women did just fine on their own, too. Backed by a three-piece band led by keyboardist Steph Brown, their 40-minute opening set was both a delight and an adventure. Mixing up powerhouse soul ballads with slinky funk grooves, Fredericks Brown conjured up a collision of early Santana-meets-Sly Stone one minute, and then pushed the envelope for more of a Jeff Buckley-meets-Joan Osborne sound the next. And Deva Mahal can flat-out sing, don’t you know.

Read my review in The Times Union

SECOND OPINIONS:
An excerpt from David Singer’s review in The Daily Gazette: “With just a drummer and bassist behind him, the sound felt plenty full, and you still heard the amalgamation of world sounds, tones and tempos filtered and simplified into Mahal’s brand of song… ‘Queen Bee’ might have been the most interesting and beautiful song of the night. He explained that the style of guitar picking there was West African, not American. While song seven might have sounded like song nine and four, it didn’t matter. It’s how you play the blues, was the message from Mahal.”

Taj Mahal will be returning to Nippertown to perform at the Freihofer’s Jazz Festival at the Saratoga Performing Arts Center on Saturday, June 26. 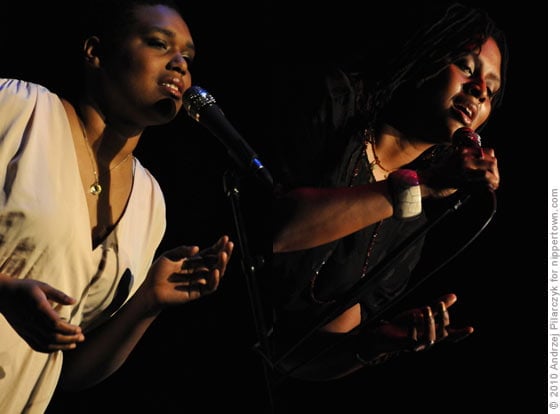 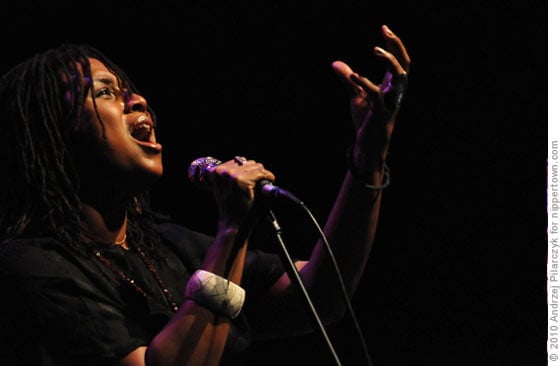 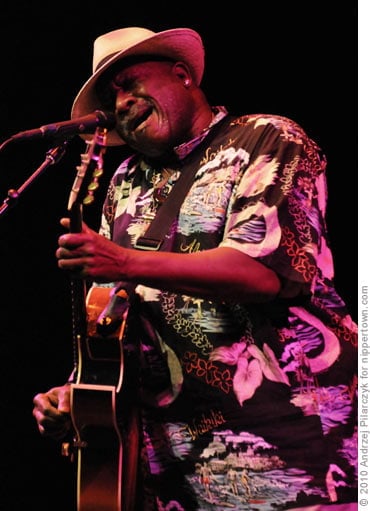