On the Radio: “Caffe Lena: 50 Years and Looking Forward” @ WEXT-FM 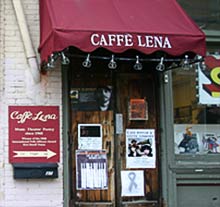 In May of 1960, Lena Spencer opened the distinctive double doors at 47 Phila Street in Saratoga Springs and welcomed visitors upstairs for a hot cup of coffee and an intimate taste of the finest music. Five decades later, its founder long passed, Caffé Lena remains dedicated to the art of telling stories through music, theater and the spoken word.

The rich musical legacy of Caffe Lena is being celebrated in the new three-part radio series “Caffe Lena: 50 Years and Looking Forward,” which will air on WEXT-FM on three consecutive Saturdays this month. The first hour-long show will be broadcast at 6pm Saturday.

The series features the music and stories of classic artists from all across the Caffé’s history – including Bob Dylan, Emmylou Harris, Arlo Guthrie, Pete Seeger, Loudon Wainwright III, Ani DiFranco and dozens more. Many of the performances included in the program were captured live on the Caffé Lena stage.

“Boiling down the incredible musical history of the Caffé into three hours has been a Herculean, but very joyful task,” says musician and arts writer Michael Eck, who wrote, produced and hosted the radio shows. “The Caffé has hosted so many magical performers in so many styles and genres, and each one of them has a story to tell in their songs.”

The second and third installments of the radio series will air at 6pm on Saturday, May 22 and Saturday, May 29, respectively. An encore presentation of the entire series is slated to be broadcast from 5-8pm on Monday, May 31.

“It’s such an intimate, funky little place,” says the show’s executive producer Chris Wienk, vice-president of radio at WEXT/WMHT. “It’s amazing to think of watching Bob Dylan sing just a few feet away. And imagine hearing the debut of Don McLean’s ‘American Pie’ in a room with only 80 people!”

“Caffé Lena: 50 Years and Looking Forward” is part of Caffé Lena’s 50th Anniversary Celebration, which includes a fundraising concert at the Caffé on Friday, May 21 with Jim Kweskin and Geoff Muldaur; a free, day-long indoor/outdoor festival at the Caffé on Saturday, May 22; and a concert by Robin & Linda Williams and Arlo Guthrie later that evening at the Zankel Music Center at Skidmore College.

“History still happens here today,” says Caffé Lena manager Sarah Craig, who served as co-executive producer of the radio show. “The Caffé is a living thing, and we’re seeing the next generation of America’s most important songwriters, folksingers, storytellers and poets on our stage right now.”

This weekend’s performances at the Caffe include Fred Eaglesmith on Friday, the 2000s Decade Concert featuring the Jeremy Wallace Trio and Ramblin Jug Stompers on Saturday and Anais Mitchell on Sunday.

Five Firsts: Joel Marshall of What She Said