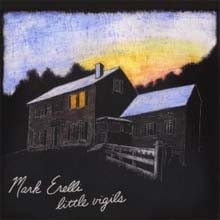 Mark Erelli is a sharp-eyed singer-songwriter, and “Little Vigils” – his ninth album in just over a decade – makes the most of his skills of observation and his keen attention to detail.

This album doesn’t shout at you. Or wave its arms around and yell, “Hey listen to me!” It’s a quiet gem of an album – 11 songs that examine the little things that we all too often overlook. And yet by focusing sharply on the small details, Erelli illuminates the Big Picture.

“Little Vigils” opening with “August” – a poignant lament to the passing of summer – and ambles through the darker, minor-key “Hemlock Grove” (“Your heart is empty as winter in a tourist town”). And “I Took the Moon for a Walk” is a fragile, piano-flecked cabaret ballad that somehow sounds equally akin to Tom Waits and Rufus Wainwright.

They’re not all ballads, though. He kicks it up a notch or two with a wistful look back at youthful, let’s-form-a-band innocence (the folk-rocking “Basement Days” – cousin to Don McLean’s “American Pie,” as well as Bryan Adams’ “Summer of ’69”). Meanwhile, “Mother of Mysteries” plows through a field of sweet bluegrass.

Erelli is no slouch as a multi-instrumentalist – when he played The Linda in Albany in ’08 as the opening act, he sat in with headliner Carrie Rodriguez’s band with dazzling results – but here’s he’s surrounded himself with some first-rate musicians, who add plenty of artful shading to his songs – fiddler-mandolinist Jake Armerding, drummer Neil Cleary, bassist-keyboardist-producer Zack Hickman, banjo-pedal steel-cellist Charlie Rose, as well as Rose Polenzani and Crooked Still’s Aoife O’Donovan.

Mark Erelli returns to The Linda in Albany at 8pm on Friday. Eric Margan of the Red Lions opens the show with a solo set. Tix are $15.

Song of the Week: Babylon