CD: Various Artists’ “Things About Comin’ My Way: A Tribute to the Music of the Mississippi Sheiks” 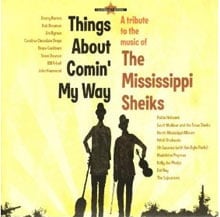 In the world of jug band music, the Memphis Jug Band is to the Beatles, as, make no mistake about it, the Mississippi Sheiks are to the Rolling Stones. One of the greatest (and most popular) pre-war country blues stringbands, the Sheiks – brothers Chatmon (Sam, Lonnie and Armenter) and neighbor-fiddler Walter Vinson – recorded nearly 100 singles between 1930-1935. Without question, the Sheiks’ best known song to this day is their classic “Sitting on Top of the World,” which has been covered by such diverse fans as Ray Charles, Willie Nelson, the Grateful Dead, Howlin’ Wolf, Carl Perkins, Bob Dylan and Jack White.

But as you might expect, there are dozens of other genuine gems hidden in the rest of their song catalog, and this album aims to bring them to the ears of a whole new generation.

There’s not much big-name, A-list star-power on this album, but that’s OK. Obviously, that’s not the point here. This is about the song, not the singer. But these 17 tracks feature eclectic batch of first-rate musicians digging deep into their roots.

For fans of the blues, there are solo selections from John Hammond (“Stop and Listen”) and slide guitar virtuoso Bob Brozman (“Somebody’s Gotta Help You”), as well as a funky rendition of “We Both Are Feeling Good Right Now,” which finds singer-guitarist Del Rey accompanied by not one, but two clarinets. Jazz fans will likely gravitate to the contributions by Bill Frisell (“That’s It”) and Madeleine Peyroux (a smoldering, pleading reading of “Please Baby”). And rest assured that gospel music fans will shout “hallelujah” for the Sojourners‘ rousing rendition of “He Calls That Religion” featuring a wicked funky banjo solo from Danny Barnes.

The former leader of the Bad Livers, Barnes also contributes one of the album’s stand-out tracks, the jaunty, strut ‘n’ slide of “Too Long,” as he channels his inner Roger Miller. Geoff Muldaur and the Texas Sheiks – a new, all-star ensemble whose self-titled debut album features Woodstock’s own Cindy Cashdollar and the late great Stephen Bruton, as well as Muldaur and his former jug band boss, Jim Kweskin – also sparkle on the acoustic funk of “The World Is Going Wrong.”

When it comes down to the very best of the batch, however, top honors go out to the Carolina Chocolate Drops and the North Mississippi Allstars. The Chocolate Drops – guitarist Dom Flemons, fiddler Rhiannon Giddens and banjo man Justin Robinson – certainly deserve the honor of serving up “Sitting On Top of the World” – slow and steady and as mournful as can be – and the Mississippi Sheiks’ legacy is clearly in good hands.

The North Mississippi Allstars, too, keep the Sheiks’ music in the jug band tradition. Opening the album with the rough ‘n’ raw but in the pocket “It’s Backfirin’ Now,” the Allstars are the only band to utilize traditional jug band instruments, such as the washtub bass and washboard. The deliciously lo-fi track also features the late Jim Dickinson on banjo.

Hopefully, this album will do just what it was designed to do – raise awareness of the Mississippi Sheiks and their considerable contributions to the vast landscape of American music. Pick up a compilation of the Sheiks’ original performances, and you won’t be sorry. Sure, it’s lo-fi recording, but it’s the real-deal music.

Quite a few of these musicians have passed through Nippertown recently: Danny Barnes at Revolution Hall, John Hammond at The Egg, Del Rey at Old Songs. And there’s more comin’ up: Jim Kweskin and Geoff Muldaur of the Texas Shieks are headed into Caffe Lena on Friday to kick off the coffeehouse’s 50th anniversary celebration, while the Carolina Chocolate Drops are dropping into MASS MoCA on Saturday, May 29.