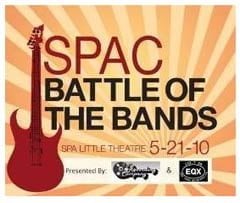 The Saratoga Performing Arts Center kicks off its 2010 summer season on Friday, and they’re doing it with a decidedly local flavor by presenting the first-ever SPAC Battle of the Bands.

The SPAC Battle of the Bands gets underway at the Spa Little Theatre at 6pm on Friday with 10 bands duking it out for top honors. Here are the finalists who are scheduled to perform:

Fox 23’s Dani Stein will emcee the festivities, and the grand prize winner will be selected by the audience and a panel of judges that includes Debbie Gabrione (of Ten Year Vamp), Jason Irwin (of WEQX-FM) and Matt Baumgartner (restauranteur and FridayPuppy.com blogger).

Pies on Wheels will be firing up freshly-made artisan pizzas at the concession stand. And the Saratoga County Chamber of Commerce Young Professionals Network is also hosting a tailgate picnic at the Gideon Putnam at 4:30pm, prior to Battle of the Bands. Reservations are required and can be made by calling the Chamber at 584.3255.

Priced at $15, all tix for the SPAC Battle of the Bands are general admission. Doors open at 5:30pm on Friday.