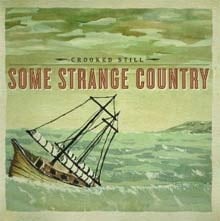 Old is new. And new is old. That’s how it sounds on Crooked Still’s brand new album, “Some Strange Country.”

Or maybe not. Maybe it all just simply sounds timeless.

The band’s fourth album sounds simultaneously ancient and thoroughly modern, balancing a solid set of traditional songs with an equally impressive brace of original tunes and an unexpected, disc-closing cover of the Rolling Stones’ “You Got the Silver.”

They come from a bluegrass perspective, but ultimately, their music takes on more of a progressive-acoustic meets chamber-ensemble approach that may be taken at a breakneck breakdown tempo (as in “Calvary”) but is always played with more precision than frenzy.

And yet, the album’s focus is squarely on vocalist Aoife O’Donovan (a graduate of the New England Conservatory), who brings an uncommonly intimate passion to her singing. Never too straight-laced. Never too free-form. Just right in the pocket, drawing listeners in deeper and deeper with each song.

This is mighty fine stuff, highly recommended for fans of envelope-pushing acoustic music.

Crooked Still celebrates the release of “Some Strange Country” with a performance at Club Helsinki Hudson in Hudson at 8pm on Wednesday. Opening the show is young bluegrass-folk phenom Sarah Jarosz. Tix are $15.