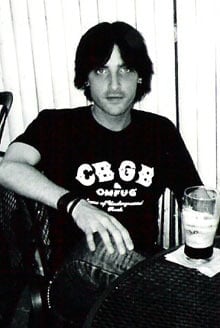 1. THE FIRST ALBUM I EVER BOUGHT WAS … Motley Crue’s “Shout at the Devil.” Actually, I bought Michael Jackson’s “Thriller” at the same time. Kinda funny thinking about that now. I’d rock out to Nikki Sixx and the gang, and then with the flip of a record I’d be trying to moonwalk along to “Billy Jean”.

2. THE FIRST CONCERT THAT I EVER SAW WAS … First actual concert I ever saw was probably on my Dad’s shoulders watching either Johnny Cash or Olivia Newton John at the Saratoga track, but considering I was probably three-years-old, I don’t remember much. One of the first concerts I can “kind of” remember is Guns N’ Roses with Aerosmith at SPAC.

3. THE FIRST MUSICAL INSTRUMENT I EVER OWNED OR PLAYED WAS … Some $10 guitar with only two strings. I learned to play all the bass lines from Motley Crue’s “Shout at the Devil” album on it. I really only needed one string to do that, but having a second string made it look more complicated than it really was.

4. THE FIRST SONG THAT I EVER PERFORMED IN PUBLIC WAS … “Dazed and Confused” by Led Zeppelin – violin bow and all. lol.

5. THE FIRST BAND I WAS EVER IN WAS … Groovadelic. We played at the Saratoga County Fair, and our set was cut short because we were freaking out the llamas. After 20 minutes of pleading with the “powers that be,” we convinced them to let us turn the entire stage around to finish the show facing away from the animals. There’s a funny video out there somewhere documenting this hilarious event.

Aaron Lewis and the other members of Vesper will be playing at the Spa Little Theater in Saratoga Springs at 6pm on Friday, competing in the SPAC Battle of the Bands. All tix are $15 and general admission.