Ellis Paul, What Was the First Album You Ever Bought? 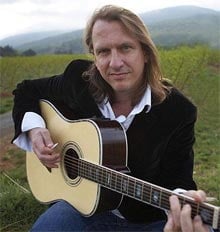 “I think it was probably a Maynard Ferguson album because when I was in high school, I played trumpet. It probably had nothing to do with where I’m at now.

And I bought a few Billy Joel albums back in the early ’80s, but I never really dove into the singer-songwriter realm until I was about 20 years old and discovered Dylan, James Taylor, Neil Young and Joni Mitchell.”