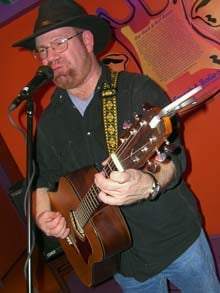 1. THE FIRST ALBUM I EVER BOUGHT WAS … My brain is a little hazy on this one since we’re talking about three decades ago, but I believe it was Billy Joel’s “The Nylon Curtain.” I remember really liking “Pressure,” especially that synth riff. Other favorite tracks from that one are “Allentown,” “Laura,” “Surprises” and “Scandanavian Skies.”

2. THE FIRST CONCERT THAT I EVER SAW WAS … Scarily enough, it was the Monkees’ 20th anniversary tour stop at SPAC. I went with my two older sisters and my brother-in-law, who all remembered the songs from their teen-age years. The show was pretty good, as far as I was concerned. Sitting in SPAC’s balcony, though … it was kind of hard to see what was going on.

4. THE FIRST SONG THAT I EVER PERFORMED IN PUBLIC WAS … Blue Rodeo’s “Dark Angel,” if we’re going by the first song I performed that wasn’t assigned to me by my musical instructors. It was at the open mic at the Van Dyck Restaurant in Schenectady back in the late summer of 2004. I didn’t think I nailed it, but the response was good.

5. THE FIRST BAND I WAS EVER IN WAS … For a while, I was an unofficial member of Jackinany. I joined them as guest keyboardist for a few shows, which is probably how I landed in Sumac – the band, not the tree.

Rob Jonas will be pulling double duty on Thursday night – playing with both the Rob Jonas Band, as well as Sumac. Also sharing the bill at Valentine’s Music Hall in Albany at 9pm Thursday will be Rob Skane.