OK, it’s not everyday that you have an interview with Paul McCartney.

But Capital Region writer Bob Girouard had that rare opportunity recently when he was writing the cover story for the current issue of Classic Drummer magazine, which features Denny Seiwell, the drummer for Wings.

Girouard is a longtime drummer (Aged in the Hills, City Lights, more) on the local music scene, as well as an entrepreneur (he helped launch the Alive at Five concert series when he worked for the City of Albany’s Special Events Office). But lately, he’s been concentrating on writing for such magazines as Classic Drummer and Modern Drummer, delivering in-depth, detailed interviews with such influential percussionists as the Band’s Levon Helm, the Rascals’ Dino Danelli, Mountain’s Corky Laing and Little Feat’s Richie Hayward.

Here’s Girouard’s recollections of his interview with McCartney:

“Because McCartney is such a busy man, I had received advance instructions from his long-time personal aide, John Hammel, the week before. John instructed me as to the time, length and protocol of the scheduled phone call. I was specifically told to call John at 9am, then the telephone would be handed over to Paul, who then would take it from there. I was to be given approximately five-ten minutes max for the interview, and when addressing him, I was to refer to him as ‘Sir’ Paul.

“Well, the landmark moment arrived, and although I’ve interviewed and/or worked with a lot of famous people, this was monumental. And frankly, I was nervous with a capital N.

“I didn’t sleep the night before – worrying about if my questions were good or interesting enough. Would I make any blunders, going into areas that were taboo? Then there was the ‘Chris Farley/Sat. Night Live’ syndrome reminiscent of the famous skit some years back where Chris just sits there – tongue-tied, blabbering all over himself because he’s so in awe of Paul that he says things like, ‘So….you were a Beatle, right?’

“So, about 8:45am I sat in front of my computer … enough coffee in me I could probably run from here to Chicago. This was it, the biggest moment of my writing career. Hell, maybe my entire career. I’m nervously tapping my fingers and quasi-rehearsing my questions out loud when three minutes before I was to make the call the freakin’ phone rings! I went crazy. I mean I was furious. Who the hell would be calling me at his moment when I’d instructed everyone I knew that, well, God help anyone who’d call me at this moment!

“I picked up the phone, and in nothing short of a curt tone bellowed, ‘HELLO, who is….?’ A voice on the other end said, ‘Hello, Bob?’ I answered back, ‘Yeah, what do you…’ Then those words, ‘This is Paul.’ To which I replied, ‘Paul? You mean Sir Paul?’ The voice responded, ‘OH, YOU CAN CALL ME PAUL.’

“At this point I almost peed my pants. And the first thing that came out of my mouth was, ‘Sir Paul, you are amazing. I thought I was supposed to call you?’ His reply: ‘Don’t worry, no problem.’ I mean, just another “typical day?” Shit, Paul McCartney just picked-up the darn phone and called ME, for God’s sake! Tell me I’m not dreamin’!

“Thus began a conversation that lasted not only five, but 25-minutes – embracing many things including not only Denny Seiwell’s tenure with Wings, but also the Beatles, the key relationship between the drummer and the bassist (including specific examples of mimicking his and Ringo’s rhythmic parts), his own love of the drums and discussion of how he was introduced to, and how he personally approached the instrument on the many Beatles, Wings and solo albums he’s played drums on.

“Heck, it was just two guys – Bob Girouard and Paul McCartney – talkin’ trash…like they’ve known each other forever. It was indeed ‘A Day in a Life.’ Or perhaps a lifetime?” 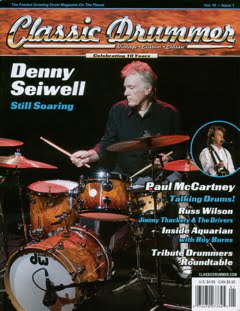 When the issue of the magazine hit the stands recently, there was another connection to the Capital Region – the photo of McCartney that’s on the magazine cover was taken by local musician-photographer Rick Bedrosian of Hair of the Dog.

“After receiving approval from Paul’s office consenting to the interview, I knew I had a lot of research to do,” Girouard freely admits. “Not only for the Wings period, but also from the beginning of the post-Beatles era. I knew that Paul had played drums on some legendary songs – ‘Back in the USSR,’ ‘Dear Prudence,’ ‘Lady Madonna,’ ‘Band on the Run’ and even ‘My Dark Hour’ by Steve Miller. I felt that if this was going to be a great interview, it had to be predicated on my knowledge but also needed to be a little innovative at the same time – especially if I wanted to retain his interest while conversing.

“I had heard that Rick Bedrosian was a Class-A Beatles aficionado, so I called him and asked him if he’d recommend some key catalog to listen to. I knew I had to dig into Paul’s first solo album, ‘McCartney,’ as well as ‘Ram’ if I wanted to capture the roots of McCartney’s post-Beatle genius, and Rick was kind enough to put some reference CDs together for me.

“We met for lunch, and he showed me some of his amazing photos, including some stellar shots of McCartney from his recent tours. There was one from last July’s concert at Citi Field that was killer, and he offered to give it to Classic Drummer to use in the story. I recommended to the magazine that we utilize it, and they agreed. Little did we know that it would be used as a cameo shot on the cover of the magazine right next to Denny Seiwell!”

As Girouard explains, “The fickle finger of fate had touched not one, but two long-time veterans of the Capital District music scene.”

And we here at Nippertown.com are kind of tickled as well. Bedrosian’s photo of McCartney that adorns the cover of Classic Drummer was originally published right here last July.

Parade of Shoes: “Dancing at Lughnasa”