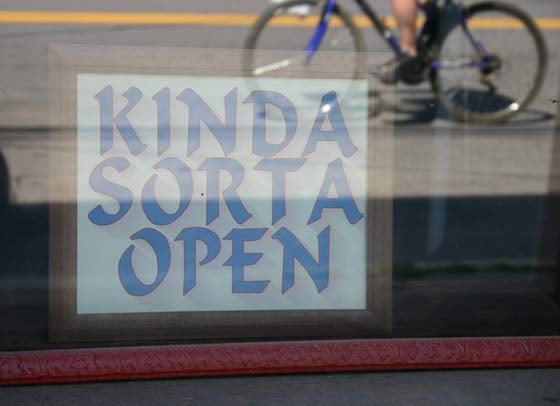 It seems to be the sign of the city all over Nippertown: Kinda Sorta Open.

We spotted this sign in the window at Mahar’s in Castleton. Yes, that’s right, Castleton. It seems that the famed beer connoisseurs’ hotspot in Albany is branching out with a new, on-the-other-side-of-the-Hudson pub. Their doors have been open since Friday, but when we stopped by on Wednesday they still hadn’t received their New York State liquor license yet, so all they were serving was some sandwiches, cheese and draft root beer.

The delayed liquor license is also the cause of the kinda sorta open Club Helsinki Hudson, too. The brand new, long-awaited restaurant and nightclub opened its doors to the public for the first time on May 1 for the first in a series of pre-official opening Sound Check Events with “a limited bar,” meaning soft drinks and sparkling waters. Helsinki Hudson has two events on tap this weekend – the Friends of Daniel Pearl FODfest Community Concert at 8pm Friday and the Bindlestiff Family Cirkus at 9pm Sunday.

Meanwhile, the Judge’s Inn at 254 Broadway in Troy is doing the kinda-sorta soft opening thing while waiting for its liquor license, too. After shutting down Positively Fourth Street in March, Art Fredette was planning on opening the Judge’s Inn just around the corner by mid-April. Of course, that didn’t happen, but they finally managed to get the doors open last weekend with a limited sampling menu for dinners. This week, they’ve been serving a limited lunch menu (11am-3pm), but today (Thursday) and tomorrow (Friday), they’re doing both lunch and dinner (11am-10pm).

We’ll have more details all around as the status shifts from kinda sorta to definitely open at each venue.