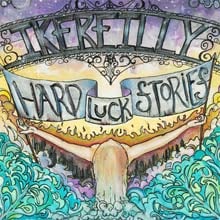 Ike Reilly is a true rock & roll believer, and he’s been churning out smart, booze-soaked, sometimes desperate tales of love – or at least sex – for a while now, usually credited to the Ike Reilly Assassination.

This time around, he’s spiced things up a bit with contributions from like-minded musical compadres like Shooter Jennings (“The War on the Terror and the Drugs”) and Cracker bandmates David Lowery and Johnny Hickman (the homegrown gardening ode “The Ballad of Jack and Haley”), but there’s no question that this is Reilly’s album.

As you might rightly guess from the album’s title, “Hard Luck Stories” tells the tales of misfits, the lost and the forgotten. It’s a tried and true, timeless theme for rock & rollers, of course, and Reilly echoes some of his touchstone influences. “The Golden Corner,” for example, resonates with the same joyous desolation as Springsteen’s “Sandy.” The opening “Morning Glory” mines the same blues-over-a-hip-hop shuffle vibe as Beck. And “Good Work” borrows Dylan’s sense of wordplay and wheezing harmonica.

This is some of Reilly’s best work yet, and that’s saying something. Yes, you could do a kinda Paul Westerberg-meets-Willie Nile shorthand comparison, and you wouldn’t be too far off the mark. But Reilly’s woozy, under-the-radar, heartland rock is really all his own.

The Ike Reilly Assassination make their long-overdue Albany debut at Valentine’s Music Hall on Thursday. John Alfred of the Killerados opens the show at 8pm. Tix are $10.