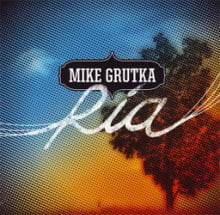 The Saratoga Springs singer-songwriter Mike Grutka describes his sound as “acoustic-based funky modern roots rock ‘n roll,” which sure as hell covers a lot of bases, but does manage to narrow down the scope of things at least a bit.

Grutka’s got some serious talent – but with this debut he wasn’t quite ready to tackle the whole magilla himself. Yes, this is a one-man project – he wrote the tunes, played and sang everything, recorded the album, produced it and snapped the photos for the album cover artwork as well.

It’s an admirable ambition to present your unique artistic vision – whether it’s music, film, canvas, whatever – without diluting it with creative compromise by bringing collaborators into the picture. And Grutka comes pretty damn close to pulling it off with this disc.

But I keep returning to “Denver (Spinning Around),” which is my fave track on the album. It’s a great song. Grutka sings in a keening monotone that immediately recalls Michael Stipe and REM. The song is chockfull of ear-grabbing guitar riffs, swelling keyboards and an appropriately propulsive bassline. It’s got everything – almost.

Grutka’s drumming drags the song down to the level of barely listenable. The drum fills between riffs are so off the mark, so totally off-beat that it almost sounds as though they were falling down the stairs.

Elsewhere on the album, Grutka’s got the right stuff. There’s a baroque (synth) string arrangement on “Sunshine” that pops right off the disc. I love the over-lapping vocal lines that he employs throughout the album. He coaxes out a great variety of sounds on the album, too – from the Crowded House-like bounce ‘n’ twinkle of “Actress” to the rubbery bass thump of “Standing Beside Me” to the crystalline keyboard tinkle of “Come With Me.”

Best of all, he’s got the songs. Smart tunes with the requisite Beatles-pop roots, to be sure, but he stretches out beyond the usual pop protocol – especially on the majestic “Goodbye” – without abandoning accessibility.

Ultimately, “Ria” is a admirable debut. The songs, the arrangements and the vision are all there. With a little more musical experience, a producer or first-rate backing musicians, Grutka will be on his way. I can’t wait to hear what he does next.

Mike Grutka steps onto the stage at the Bread and Jam Cafe in Cohoes at 8pm on Saturday for a solo acoustic CD release party. He’ll be sharing the stage with William Nicholson. Admission is $5.

LiveNation: No Service Fees on Tix in June