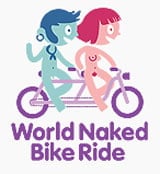 Yeah, you read that right.

Actually, it’s the second annual Capital District World Naked Bike Ride, and it’s scheduled to take place in Washington Park in Albany on Saturday. All are welcome to participate. Nakedness is not required. Bare what you dare.

Participants are encouraged to begin congregating in the area of the Moses Statue in Washington Park starting at 12noon. The exact route of the ride will be determined on the day of the event, with the ride tentatively planned to begin at 1pm.

While the World Naked Bike Ride is returning to Albany’s Washington Park for only its second year, there are other WNBRs that have been taking place around the world for some time now – more than 70 cities in more than 20 countries. Most of the rides in the northern hemisphere are scheduled to take place on Saturday.

In answer to the most obvious question – Why are you riding naked? – the WNBR website provides the following short and succinct response: “To celebrate cycling and the human body. The ride demonstrates the vulnerability of cyclists on the road and is a protest against oil dependency.”

There has even been a documentary film made about WNBR, “Indecent Exposure to Cars: The Story of World Naked Bike Ride”:

The first Capital District World Naked Bike Ride was held on June 13, 2009 in Washington Park. There were 14 bike riders in attendance … in varying levels of undress.

Bare what you dare!