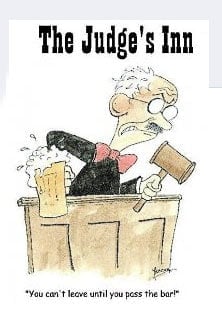 Last month, we wrote about the delays and frustration that some trying-to-open-their-doors venues have experienced in obtaining their liquor license.

But at least one new Nippertown venue has finally gotten everything squared away. The Judge’s Inn in Troy – which had its non-alcoholic soft-opening back on Thursday, May 20 – finally has its license in hand. They began serving a full complement of beer, wine and cocktails on Friday, June 4.

Artie Fredette – formerly of Positively Fourth Street, which closed its doors back on Saturday, March 27 – is at the helm at the Judge’s Inn, so in addition to drinks and food, you know that live music is going to be on the menu, too.

The Judge’s Inn – located at 254 Broadway in troy, the site of the former Golden Fox restaurant – gears up its stage and sound system for the first time at 8:30pm on Friday. The Erin Harkes Band headlines the opening bash with Maurizio opening the show. Admission is $5.

Turn Your Back When You Drink It…