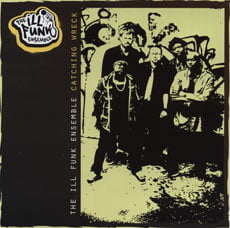 Let’s face it, contemporary hip-hop is a producer’s game. So, the concept of whippin’ up some crack hip-hop with a live band is seriously tricky business. If you’ve ever seen them doing their thing live, however, you know that Nippertown’s Ill Funk Ensemble can bring it on the bandstand.

But whether they could successfully translate that same live excitement to a track-free studio recording was anybody’s guess, though. Until now.

With their debut full-lengther, “Catching Wreck,” they’ve managed to brush those doubts aside with a deft hand. Most of the credit goes to the band’s guitarist BJ FitzGerald, who handled the album’s engineering, producing, mixing and mastering at Accidental Studios in Delmar. The fact that FitzGerald also splits his stagetime playing with the brass-fueled country band, the Hillbilly Horns, only underscores his versatility and big ears.

There ain’t even a hint of twang here, however. Ill Funk is pumping out a soulful urban sound, a custom-made brand of now-funk that’s undeniably steamy.

Local music scene vet Jermaine Wells handles the microphone with aplomb, dishing up the sublime rhymes with an undeniable sense of style. There’s no hardcore gansta-rap posturing and the brash bravado is kept to a minimum. This ain’t underground stuff – not by a long shot.

But the beauty of the Ill Funk flow is their genre-busting, generation-bridging mix of rap and soul. They dip into rap-rock fusion with some distorted, buzzsaw guitar on the thumpin’ title track and the disc-closing “Infinity,” but much of the album’s strength lies in the old-school ’70s-style rhythm guitar work that keeps the dance floor hoppin’.

In fact, part of Ill Funk’s charm is that they seem capable of channeling a kind of 21st century mash-up of Kool & the Gang and the Isley Brothers. They bring the horns to the table for the churning, party-hearty “Get Down,” and they pare it all back with a minimalist “Troubleman.” And the best song of the batch, “Damned If You Do,” is rooted deep in the blues. And the grooves are in the pocket thanks to the rhythm section of keyboardist Joe Stoner, drummer Dennis Brooks and the poppin’ bass of Duanne Etienne.

This album is made for summer. Grab a copy and blast it. It’s all hot sand and asphalt, a big sizzle readymade for downtown and/or the beach. You can smell the sunscreen and the gin ‘n’ juice.

The Ill Funk Ensemble celebrates the release of “Catching Wreck” with a CD release party and performance at Savannah’s in Albany at 9pm on Saturday. Admission is $5.

Song of the Week: Tell It To My Heart