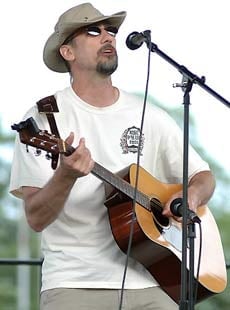 1. THE FIRST ALBUM I EVER BOUGHT WAS … Well, it was “Billion Dollar Babies” by Alice Cooper. I didn’t buy it, but I did swipe it from my brother, who was into Alice, Zeppelin and southern rock bands. My art teacher in elementary school was something of a cool ’60s hippie and used to let students bring in music to play while working on projects. I remember bringing that record into class and spinning up “Billion Dollar Babies” and “No More Mr. Nice Guy”. There were quizzical looks from many parts of the classroom. Those tunes really set the mood for plaster casting, clay shaping and spot welding.

2. THE FIRST CONCERT THAT I EVER SAW WAS … Johnny Cash, sometime around 1969 or so. I believe it was at Saratoga Race Track, where they would put on events like that on occasion. I went with my parents, who both enjoyed music by artists like Cash and Hank Williams.

3. THE FIRST MUSICAL INSTRUMENT I EVER OWNED OR PLAYED WAS … The first ‘real’ instrument that was mine was an alto sax that my mom bought for me at Hermie’s Music Store in Schenectady. I started taking lessons in 4th grade and played straight through until I graduated high school. I learned to play alto, tenor and bari sax, and performed in marching bands and jazz bands for about eight years or so. However, I also have photos from Christmas when I was about four or five years old, and my parents bought my siblings and I some plastic guitars, banjos and trumpets. They weren’t ‘top shelf’ gig gear, but they definitely got the job done in the front room of the house for hours, jammin’ and makin’ noise. The other instruments that I used when I was just a lad were a beautiful old player piano we had at our place on Flood Road (hence the current band name) in Westerlo and a baby grand piano that we had at our place in Albany. The player piano was awesome because you could put music rolls in it, and have it play music for you, and play along with it, or just tickle the ivories as you’d like. The baby grand was my mom’s, and she played it all the time, and taught me how to play some when I was just about six or seven years old. She is a well recognized church organist locally and has been playing professionally since she was 12. She’s been an organist for over 70 years, and we still have the piano. Both sound even better today, having aged with distinction!

4. THE FIRST SONG THAT I EVER PERFORMED IN PUBLIC WAS … Hard to say it was so long ago, but it was likely something by Black Sabbath, Zeppelin, AC/DC or some similar band. I’ve mellowed out as far as the music I now write and play with the Flood Road Boys, in that I’m more into folk and roots music, but back then it was hard rock and metal all the way.

5. THE FIRST BAND I WAS EVER IN WAS … Hmmm, do garage bands count? Back in the 70’s, when I was playing sax, I got together with guys at school, including my buddy Vince Zandri (the Blisterz) and we would try wailin’ on different stuff. A little later, I took up the Fender Strat, and again school buddy Micheal Eck (Ramblin Jug Stompers), Todd Hurley (worked later as a roadie for Johnny Winter and others) and I formed a threesome that banged out tunes from the Go-Go’s, Journey, Zeppelin, the Cars and other bands. I don’t remember if we even had a name for ourselves back then. We would get the amps and mics set up at someone’s house or in the garage with the doors up, and rock out to the neighborhood. We were usually good for a couple hours, by which time we had maxed everyone out – including our families. Lots of fun back then. It was such a different time than things today, but, man, was it memorable.

J. Peter Yakel joins the other members of the Flood Road Boys as the host band for the second annual Rhythm on the Ridge Roots Music Fest at Maple Ski Ridge in Rotterdam on Saturday. The music begins at 12noon, with such additional featured performers as the Red Haired Strangers, Fairview Avenue, Happy Balky & the Good Livin’, Ramblin Jug Stompers, Sweet Cider and others. Admission is $12; children under 12 free; $2 discount with any canned good donation to the Northeast regional Food Bank.