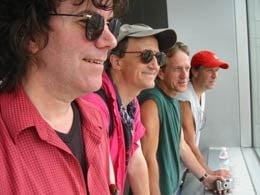 The Reducers formed when punk was still brand new, but what they took away from it was not the fashion of safety pins or spiky hair, it was the fierce independent spirit along with a sense of urgency in their music – traits the Reducers have stayed true to for over thirty years.

What the Reducers have always been is a pub band – and I mean a really good bar band. From under the thatch of his trademark curly locks, Reducers’ guitarist-vocalist Peter Detmold says, “I’ve got no problem with that tag – I even wrote a song about it called ‘Pub Rocking.’ (duh) In the late 70’s, when musical role models tended to be stuff like Zeppelin, Fleetwood Mac, Styx, Kansas, blah-blah- blah – when we heard Dr. Feelgood, Ducks Deluxe and all that crew, we thought, ‘THAT’S the stuff!’ We used them as a blueprint for the band, along with the earlier rock and rollers, and the soon-to-arrive punk rockers. At the end of the day, it’s all rock & roll. And THAT’S what we like!”

That is not to say that the band is without achievements. In the mid-’80s, their albums received national college radio airplay and acclaim which led to major label interest. The band landed a track on the Epic Records’ album “Epic Presents The Unsigned,” as well as acclaim as “Best Unsigned Act of 1985” from CMJ.

In the end, the Reducers choose to make no compromise in the music and remain independent. In 2008, coming off a jaunt to Japan, the band rediscovered themselves and the primal rock force that had originally ignited them, releasing “guitars, bass & drums,” their first album of new material in more than a decade.

Sometimes mistakenly thought of as hailing from Boston, the Reducers are a New London band – New London, CT, that is. Detmold says, “I never minded being thought of as a Boston band; a lot of our favorites were from there. The Neighborhoods, the Dogmatics, the Lyres, Scruffy the Cat; we played with ’em all, and I think we fit right in. (I think that Howard at Valentine’s may have initially thought we were from Boston.)”

According to Detmold, Albany has always been “….. well, it’s a road trip for the band. We like that. Howard is very supportive of what bands like us do, and his club is a testament to that. He’s a guy that likes rock & roll and baseball – both high on my list. Albany’s a cool town, and we’re glad to be back in there. (Although I am saddened to hear about the Lark Tavern, one of my faves – good luck to them!) Hope the folks come out. We will be bringing the rock!”

If you want to see what a real, vital, veteran band of pub-rockers can do, cruise over to Valentine’s Music Hall on Saturday to see the Reducers rock. Also on the bill are Robot Monster and Graboids. Tix are $8.

Real Good for Free: Garage Bands in the Garage