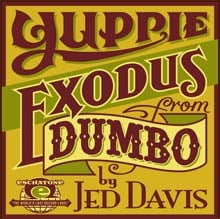 Jed Davis – leader of such potent combos as the Hanslick Rebellion and Jeebus – has left Brooklyn behind and returned to sunny shores of Nippertown.

And as it so happens, he’s also just unleashed a new tune, “Yuppie Exodus from DUMBO,” which – as Davis not so succinctly points out – “may or may not explain why I decided to finally get the hell out of Brooklyn.”

The song is a hoot-and-a-half kiss-off – a deliciously scathing little ditty about Brooklyn-centric hipperism that Davis has wrapped around a jubilant slice of Randy Newman-in-New Orleans neo-Dixieland-style romping. The lyrics manage to name-check (and skewer) such institutions as Craigslist, hedge funds, McSweeney’s, Vespas, Etsy, Conde Nast, “This American Life,” Grizzly Bear and Grapes of Wrath (the book or maybe rather the movie, but not the band).

There’s mucho grando horn work interweaving all throughout the tune, thanks to the fine folks from Bjorkestra (yeah, look ’em up if you’re not familiar) and clarinetist Ralph Carney (from Tom Waits’ stable of musical sidekicks).

And – oh yeah – the tune is available in two formats: digital download and wax cylinder. And, no, he’s not kidding. The wax cylinder version is available in a limited edition of 50, featuring a four-minute edit of “Yuppie Exodus From Dumbo.” Each cylinder in the edition of 50 is signed and numbered by Davis and legendary illustrator Michael Doret, who designed the packaging. (Doret has also designed numerous covers for Time Magazine, the New York Knicks logo and two album covers – “Rock and Roll Over” and “Sonic Boom” – for Kiss.)

The price of the cylinder is $30, which also includes immediate download of the two-track single in your choice of 320k mp3, FLAC, “or just about any other format you could possibly desire,” as Davis explains. And he adds, “Technically, the cylinder is not wax – it’s hard plastic so it will never degrade, no matter how many times you play it on your family Edison.”