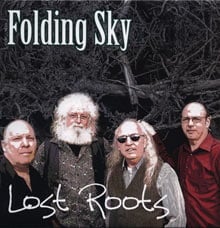 Guitarslinger Mark Emanatian has been spiking his unique brand of the blues with a decidedly psychedelic edge ever since he parted ways with Ernie Williams & the Wildcats and formed Folding Sky.

And if Williams is an old-school traditionalist when it comes to the blues, Emanatian is unquestionably a forward-thinker – even on this album which would seem to find Emanatian rummaging through his memory banks to pay tribute to his righteous, ramshackle collection of musical influences.

Folding Sky manages to conjure up both Bob Dylan and Jimi Hendrix with “St. Peter,” a dramatic barn-burned in the mold of “All Along the Watchtower.” And while “Ghosts” tends to lean toward the rockabilly end of the musical spectrum, “Shimmy, Shimmy, Shimmy” zeroes in on that 1969 Woodstock sound of Santana’s rendition of “Black Magic Woman.”

In addition to his stellar guitar work, Emanatian’s graveled growl of a voice vividly brings these nine original songs to life with a wink and a snarl. And the songs themselves stand quite capably on their own merit. As an overall collection of songs, the album may not be as quite as consistently strong as Folding Sky’s 2004 album, “Ghost Yard,” but gems like the opening volley of “Psycho Johnny” and the unexpected “Watervliet Waltz” stand with the band’s very best work.

And, make no mistake, Folding Sky is a band. While Emanatian deserves (but doesn’t take) name-above-the-title credits, he couldn’t have crafted such a searing, soaring work of the blues-and-beyond without the crucial contributions of the lock-step rhythm section of guitarist Grant Perry, bassist Tom Dolan and veteran drum guru Al Kash.

“Lost Roots” finds Mark Emanatian and Folding Sky simultaneously looking toward the past and the future of the blues. And that’s no mean feat. The fact that they manage to nod in both directions with 20/20 vision is simply astonishing.

Folding Sky rumbles into the Ale House in Troy at 9pm on Saturday for a CD release party and performance to honor “Lost Roots.” You can also find them at the Stony Creek Inn in Stony Creek at 7pm on Sunday and at Dutchman’s Landing Park in Catskill at 7pm on Thursday.