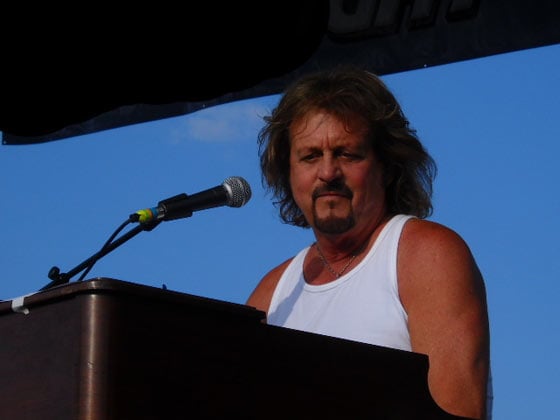 If you didn’t know any better, you might think that the Gregg Rolie Band is just another tribute act – paying homage to the early Woodstock sound of Santana.

And, in a way, that’s exactly what they are.

But considering that Rolie was the original vocalist and keyboardist (and, in fact, wrote more of the tunes than Carlos Santana did on the breakthrough “Santana” album), the Gregg Rolie Band is certainly something more than just that.

Rolie rolled into Riverfront Park on Thursday, celebrating his 63rd birthday. And while waiting for drummer Ron Wikso’s broken hi-hat to be replaced early in the show, the crowd serenaded Rolie with a chorus of “Happy Birthday.”

Guitarist Kurt Griffey was in the unenviable position of standing in as Carlos Santana, but he did an admirable job, echoing some of Santana’s trademark riffs and then soaring off in his own direction. It’s a thankless job, but he somehow made the songs his own, while still paying tribute to Carlos.

They dug up several classic soul gems – Foy polishing up Barry White’s “Never, Never Gonna Give Ya Up,” while Hendricks aquitted herself nicely on Aretha’s “Rock Steady” – but in truth, the band shined brightest on their own original material, especially the blues-drenched “Tell Me What’s Missing.”

THE GREGG ROLIE BAND SET LIST
Evil Ways
Jingo
Going Home
No One to Depend On
As the Years Go Passing By
Bailamos el Son
???
Give It to Me
Soul Sacrfice
Black Magic Woman
Oye Como Va
ENCORE
Everybody’s Everything

A Musical Memorial to Sam Farkas