CD: John Scarpulla’s “Before the Streetlights Come On” 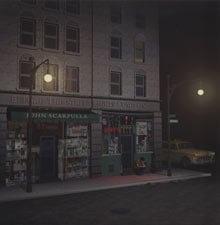 Soulful singer-songwriter John Scarpulla is back with his new album, “Before the Streetlights Come On,” the follow-up to his fine 2008 album, “Blue Ruin.” And it’s a big album – 14 original songs clocking in at 64 minutes long.

If there’s a touchstone in Scarpulla’s music, it’s unquestionably Van Morrison – bluesy, poetic and obsessive. The Morrison influences shine brightest and most obviously on “This House,” “Naturally,” “Stumblin’ Into the Arms of June,” “Coffeehouse” and the album’s title track (fueled by Kristina Johnson’s sensual sax). Of course, if you’re gonna wear your influences on your sleeve, you could certainly do a whole lot worse than Morrison.

The Morrison comparison is also spurred on by the jazzy upright bass playing of Tom Wetmore, which resonates like Richard Davis’ work on “Astral Weeks” on the album’s opening title track.

Fortunately, Scarpulla is no mere Morrison wanna-be. There’s a definite hint of Dr. John in Scarpulla’s sweetly sandpapered vocals. There are also echoes of David Baerwald’s desperate cynicism in “Coney Island” and “Breathless,” the latter featuring a pennywhistle (!?!) solo.

Scarpulla is a bit less successful when he leans toward the ’70s country-rock end of the spectrum, as he does with the banjo-flecked “California” and the Pure Prairie League-ish “Crazy Rider.”

And he makes his deepest, most resonant impressions with bona fide gems, such as “Whiskey Cross,” the soul-blues “Let It Rain” and the atmospheric “It’s Alright.”

John Scarpulla will be the feature performer at the monthly CRUMBS Nite Out session at The Linda in Albany at 7pm on Thursday. He is also slated to perform on Saturday at the Art On Lark festival (12noon on the Madison Avenue Stage) on Lark Street in Albany. Both shows are free.