Electric guitar legend Adrian Belew has had one of those long and varied and illustrious careers that many a musician can hardly even dream of.

He started out on the national scene with Frank Zappa’s band, went on to share the stage for 30 years with Robert Fripp in King Crimson, toured as David Bowie’s musical director and performed with countless other bands from Talking Heads to Paul Simon to Nine Inch Nails. And along the way, he somehow also found time to record and tour under his own name and with his own on-and-off again outfit, the Bears.

So some people found it difficult to believe that this maestro of the six-strings would roll into town and play an intimate concert at The Linda in downtown Albany. But he did. And what a concert it was!

Half way into the performance, you thought that Belew was not only in your living room, but was also a very old friend who had stopped by to say hello and get you caught up with his life and career.

Unheard of by a musician of his stature, Adrien Belew actually had several Q&A sessions with the audience in the middle of his show. The questions were great, and he didn’t sidestep or ignore any of them.

Asked if King Crimson was going on the road again, Belew said he had just contacted Robert Fripp about it, but had not heard back from him yet. He was also asked a myriad of things ranging from who makes his guitar and electronics to what was it like working and playing with Bowie, Zappa, Reznor, etc.

Since it was a solo show, there were surprising few things on stage with Belew – just a few amps and speakers, a bevy of foot-pedals, a Mac computer and a new professional programmable rhythm-and-drum box from Yamaha. All of which he had explained in the Q&As, and all of which he utilized to great effect throughout the night.

Sometimes it sounded as though Belew was playing two guitars at once. At others times, he sounded like a full band, reminiscent of his Power Trio, who he played with at Revolution Hall the last time he rolled through town. He even sang on a few tunes. Most of the repertoire was pulled from his newest studio release “E” and the older, “Op Zop Too Wah.”

Onstage, Belew was surrounded by several of his large paintings. By his own admission, he’s a self-taught artist with the brush, but then again, who knows if he might have a budding second career. After all, he’s self-taught on the guitar, too, and that’s worked out for him pretty well. Hmmm…

Adrian Belew brings his “Painting With Guitar” show to the Iron Horse Music Hall in Northampton at 7pm on Sunday. Tix are $25 in advance; $28 at the door. 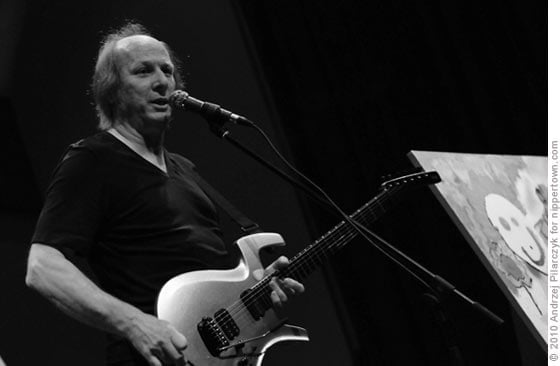 A Virtual Tour of the Hyperreal