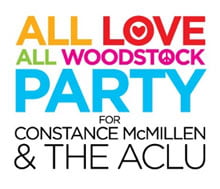 Lesbian teen Constance McMillen was thrust into the national spotlight earlier this year when her Mississippi high school refused to allow her to bring her girlfriend to the prom.

Now, McMillen is being honored as the Grand Marshall for the Gay Pride Parade in NYC on Sunday. But she’ll kick off her weekend at the All Love, All Woodstock Party on Friday evening at the Bearsville Theater.

Friday’s bash kicks off at 7pm with cocktails, hors d’oeuvres and an auction of celebrity swag and autographed memorabilia from such stars as Lady Gaga, Maggie Gyllenhaal, Peter Sarsgaard, Reese Witherspoon, Lucinda Williams, Cobra Starship and others.

But that’s just the beginning…

The evening’s star-studded festivities will also feature musical performances by headliner and Rock & Roll Hall of Famer Ronnie Spector. Also performing at the shindig will be neo-country singer Laura Cantrell, indie band Hank and Cupcakes, the Paper Planets, Daniel Cartier and others, including several surprise guests, both live and via video performances. Comedian Murray Hill – the self-proclaimed “hardest working middle-aged man in show business” – will serve as the master of ceremonies.

General admission tickets are $50; VIP balcony seats are $100; and student tickets will be available at the door for $25.

All proceeds from the benefit bash will go to McMillen’s education fund, the ACLU’s Lesbian Gay Bisexual Transgender and AIDS Project and the Onteora District’s Gay Straight Alliance.