Be Here Now: The Earth First! Journal Roadshow @ the Sanctuary for Independent Media, 6/30/10 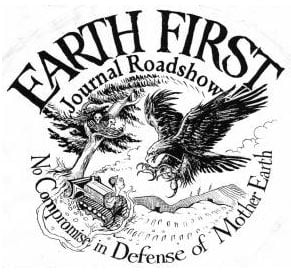 The Sanctuary for Independent Media wraps up it 2009-2010 season on Wednesday night with the Earth First! Journal Roadshow.

Activists from the radical environmental group Earth First! present a multi-media extravaganza celebrating 30 years of doing battle on the front lines, as they try to save our planet from ecological destruction.

Joining the Roadshow at 7pm on Wednesday will be Rik Scare (Skidmore College professor and author of the controversial book, “Eco-Warriors”) as well as the “intense folk” duo the Pleasants (featuring Amanda Rogers and Mike Matta) in support of their new CD, “Forests and Fields.”

Admission for Wednesday’s presentation and performance is by donation ($10 suggested, $5 student/low income).