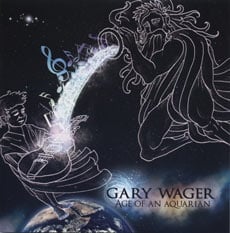 You might get the wrong idea here. With an album titled “Age of an Aquarian,” it might seem difficult to get past the new-agey-ness of it all. Flip over the CD jewel case, and you’ll find as song titles as “Peace Garden #7,” “A Butterfly Song” and “An Aquarian Muse.”

Well, not so fast…

Amsterdam guitarist Gary Wager has created a sparkling album of solo acoustic guitar instrumentals. Yes, some of the music leans toward the new age end of the spectrum, but it never succumbs to the often saccharin cliches and aimless meandering of the genre.

Instead, his nimble guitar work resonates with echoes of such fretboard masters as John Renbourn, Pat Metheny, Leo Kottke and Mason Williams. Not exactly, of course, but there’s some really wonderful, beautiful music here. Don’t dismiss it out of hand.

“No tricks, no gimmicks, not even lyrics to consider,” Wager explains. “Just music on an acoustic guitar, a little reverb, all to translate to the individual person.”

Gary Wager drops by the Moon & River Cafe in Schenectady at 8pm tonight, splitting the bill with singer-songwriter Rebecca Angel. Admission is free.