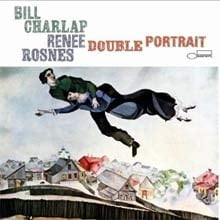 What you have to know about Bill Charlap and Renee Rosnes is that they are two world-class jazz pianists. You should also know that they were married to other people with whom they had kids and later divorced. They’ve been married to each other for the past three years.

Well, it’s truly a duo album of mostly standards played on two grand pianos with no other accompaniment. There’s no bass, no drums – the minimum backing to propel things along in a typical jazz recording session.

But does it work?

First and foremost, the standards that these two masterful pianists have chosen are not the usual “On Green Dolphin Street” kind of things. Instead, they selected lesser known tunes – things like Lyle Mays’ “Chorinho,” Wayne Shorter’s “Ana Maria” and Gerry Mulligan’s “Little Glory,” for example. All are incredibly well performed and not at all associated with four hands and two pianos.

The irony for these two piano giants – who both went through painful divorces – is that they decided to close the album with “Never Will I Marry” by Frank Loesser.

Hmmm… Good thing they didn’t listen to that composer’s ‘pearl of wisdom,’ because this album wouldn’t have happened.

The chemistry between these two pianists is marvelous. Maybe it’s the marriage thing. Or maybe it’s the fact that they had a couple of years of juggling kids, solo projects and concerts before they could find the time to sit down and record these pieces. There is a passion and a drive that makes this collaboration work well beyond that of a typical studio session.

For those who love the sound of the acoustic jazz piano, this album is highly recommended. For those who love jazz, this is a record to pull out and listen to during those contemplative and quiet moments in daily life because it is both inspirational and a lovely caress for the soul.

Bill Charlap and Renee Rosnes will perform together at 8pm tonight at Skidmore College’s Zankel Music Center in Saratoga Springs. The performance is part of the Skidmore Jazz Institute concert series. Admission is free.

Real Good for Free: Stony Creek Music in the Park