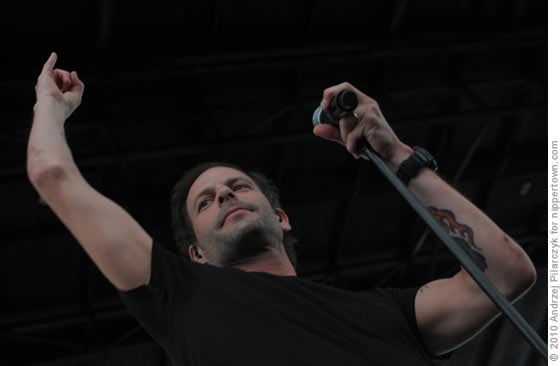 And when it’s cut with a hint of melancholy like the Gin Blossoms do it, it’s even better.

“We’re the Gin Blossoms from Tempe, Arizona, a humble band from a dusty desert,” he said by way of introduction.

Opening with the delicious jangle-pop of “Follow You Down” (with Wilson darkly declaring, “I’ll follow you down, but not that far”), the lead singer jumped off the stage and passed a tambourine out to a member of the audience to play along.

By the second song of the show, the as-yet-unreleased “Don’t Change for Me” (“You gotta be the best you can be, but don’t change for me”), he had grabbed the cellphone of another front row fan and held it next to his microphone singing nearly the whole song into it. (Kinda gotta wonder what that actually sounded like on the other end of the line, don’t ya?)

Yeah, he had all the right moves for a veteran rock & roll frontman. He just didn’t make any of them with any kind of heartfelt conviction. And then midway through the set, he plopped a decidedly un-rock & roll floppy hat on his head and pulled it down over his eyes for a goodly portion of the show.

Despite that, however, he was in fine voice, especially as he belted out fab tunes like Neil Finn-meets-Del Amitri-esque “Til I Hear It From You,” the rippling and ripping “Found Out About You” and, of course, the show-closing hit “Hey Jealousy.”

They played nearly half of the tunes from their upcoming album, “No Chocolate Cake” (which is slated for release in September), and most of them sounded as good as the Gin Blossoms’ vintage material – especially the hook-filled new single “Miss Disarray” and the Beach Boys-flavored “Dead or Alive on the 405.”

Maybe they were just having an off-day.

Local faves Ten Year Vamp ripped through an hour-long set of original rockers spiced with a few off-beat covers (Lady Gaga’s “Poker Face,” Madonna’s “Like a Prayer” and the best of the batch – Bryan Adams’ “Summer of ’69”).

Singer Debbie Gabrione was a non-stop, hyper-kinetic presence, bouncing around the stage. The five-piece band’s original material was strong – especially “Never Know,” “Goodbye” and “One Night Ticket” with a slightly reggae-ish feel. Still, it would have been nice to hear her take a breather and belt out a ballad.

Ten Year Vamp plays at Jillian’s in Albany on Saturday night, and then heads up to the Saratoga Performing Arts Center to open the show for Bon Jovi on Sunday evening. 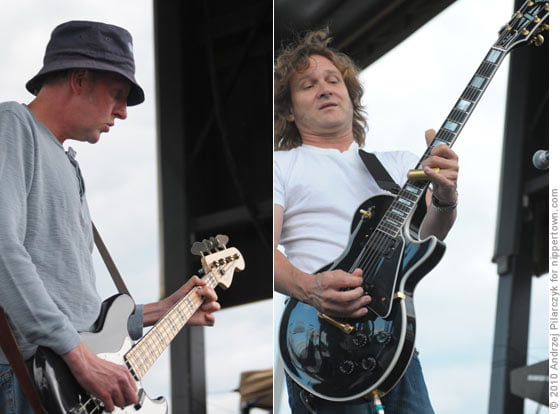 Who’s Afraid of a Little Opera? A Glimmerglass Newbie Guide