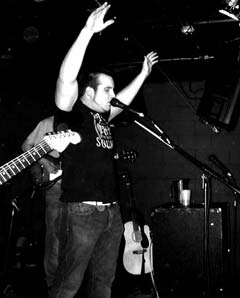 1. THE FIRST ALBUM I EVER BOUGHT WAS … Weezer’s “Blue album.” This was the first CD I bought with my own money. Before this I had to rely on hand-me-down vinyl and cassette tapes. I inherited an excellent collection of classic rock vinyl that kept me busy for a long time. The first cassette my parents bought me? Vanilla Ice’s “To The Extreme.” Unlike Ice, the “Blue” album is still in heavy rotation.

2. THE FIRST CONCERT THAT I EVER SAW WAS … Grand Funk Railroad at the Palace sometime in the early ’90s. I called in to a radio station to win the tickets. I neglected to tell them I wasn’t 18, so I didn’t break the contest rules. My friend and I were definitely the youngest unaccompanied minors at the show.

3. THE FIRST MUSICAL INSTRUMENT I EVER OWNED OR PLAYED WAS … The first instrument I ever played was my grandmother’s upright grand piano. Around the same time, I was given a small ’80s Casio keyboard that I wish I still had. It had midi out and sampling ability. I had no idea how to those things back then, but It would be fun to fool around with now.

4. THE FIRST SONG THAT I EVER PERFORMED IN PUBLIC WAS … Beethoven’s “Moonlight Sonata” in a grade school piano recital. Beautiful song, one of my favorites.

5. THE FIRST BAND I WAS EVER IN WAS … playing drums in a junior high hardcore band we called Nightmare. We were only together for about a week, but somewhere I still have a cassette of us performing Section 8’s “De Omega” at a talent show.

Joe Zimmerman and his bandmates in Intelligent Television invade the funky new Troy hip-spot Footsy Magoos at 9pm on Friday.