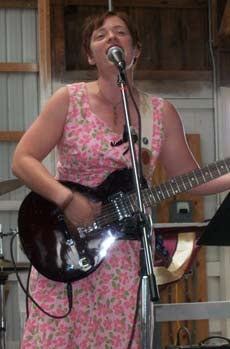 1. THE FIRST ALBUM I EVER BOUGHT WAS … Well, I didn’t actually make this purchase myself, but I must have been about six years old, and I vividly remember begging my dad to buy me the Beatles’ song “Do You Want to Know A Secret.” At that time, we couldn’t find it as a single, so he ended up buying me the full-length vinyl album “Please, Please Me,” which was awesome because I loved every song on that album. And, proving once again, that it is never too early to begin a lifelong appreciation of the Beatles. I mean, I had already lost six good Beatles-listening years!

2. THE FIRST CONCERT THAT I EVER SAW WAS … In 1993, the Spin Doctors with Soul Asylum and Screaming Trees at the Lakewood Amphitheater in Atlanta, GA (my hometown). I was with my friend (by choice) and my mom and her friend (“accompanying” the minors).

3. THE FIRST MUSICAL INSTRUMENT I EVER OWNED OR PLAYED WAS … Piano. The way the family folklore goes is that I was playing piano before I was two years old. Apparently, they had to prop me up on stacks of phonebooks on top of the piano bench. However, to this day, I still have never seen photographs or any other documentation to actually verify any of this. So it goes….

4. THE FIRST SONG THAT I EVER PERFORMED IN PUBLIC WAS … “How Much Is That Doggie In The Window.” Enough said.

5. THE FIRST BAND I WAS EVER IN WAS … I did not enter the status of band member until college. I was fortunate enough to play in various formations with several great friends/musicians. At that time, I had not yet learned guitar, so was just singing. We had all sorts of terrible names, the first of which I believe was “Brunswick Stew.” I have so many good memories of that band, whatever we called ourselves.

Kim Noyes and the rest of the Tern Rounders host their monthly “Moonlight Jamboree” at the Bread & Jam Cafe in Cohoes at 7pm on Saturday. In addition to headliners the Tern Rounders, the Jamboree will also feature performances by M.R. Poulopoulos and Lost Radio Rounders. Admission is free.