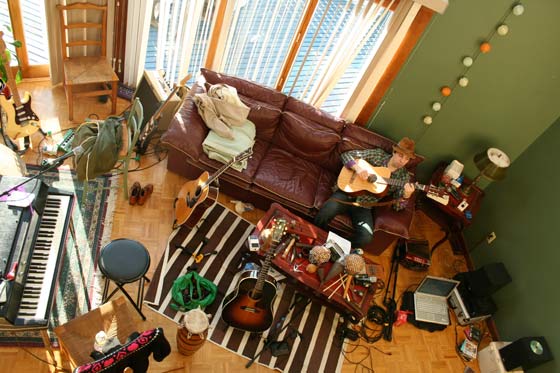 1. THE FIRST ALBUM I EVER BOUGHT WAS … The first album I bought was A Tribe Called Quest’s “Peoples Instinctive Travels and the Paths of Rhythm.” I have two older sisters, and I think one of their boyfriends at the time was into hip hop. I got into that album. I’m still thinking about covering “Ham and Eggs” off of it.

2. THE FIRST CONCERT THAT I EVER SAW WAS … Growing up 45 minutes away from NYC, you get to see a lot of great music. I remember going to a lot of local music and art festivals in the summer time around my town. Aside from that local scene, I remember going to see Deep Banana Blackout at Irving Plaza in NYC. That was the first real concert I went to. I was probably 13 or 14. The place was packed and the band killed. It was one of those moments when I realized that I wanted to be a musician. There’s nothing better than performing on a stage for an excited audience.

3. THE FIRST INSTRUMENT I EVER PLAYED OR OWNED WAS … When I was five or six, my dad gave me a drum set. I played it so much that I would rip right through the heads about twice a week. I think they were made with some kind of paper. They probably make junior drum sets a little better these days. But my dad would always find a way to repair them. Probably duct tape!

4. THE FIRST SONG THAT I EVER PERFORMED IN PUBLIC WAS … Seventh grade recital – I was way into Nirvana when I first started taking guitar lessons, so it was most likely a Nirvana song. “All Apologies”, “Come As You Are” and “About a Girl” were some of the first songs I ever learned how to play. Once I discovered Hendrix it was all over (“Watchtower”). I only put my guitar down to sleep.

5. THE FIRST BAND I WAS EVER IN WAS … In seventh grade I had a rockin’ duo with my friend Sean who played drums. Black Keys kind of vibe. Two kids in a barn playing really f%&#*^g loud! “Killin’ Floor” (Jimi Hendrix version) was a favorite. We used to smoke cigarettes behind the barn and think that we were real cool.

Chris Kyle and the other members of Railbird flock together for a performance at Caffe Lena in Saratoga Springs on Sunday evening to wrap up the opening weekend of the racing season. Sean Rowe opens the show at 7pm. Admission is $15 in advance; $17 at the door.