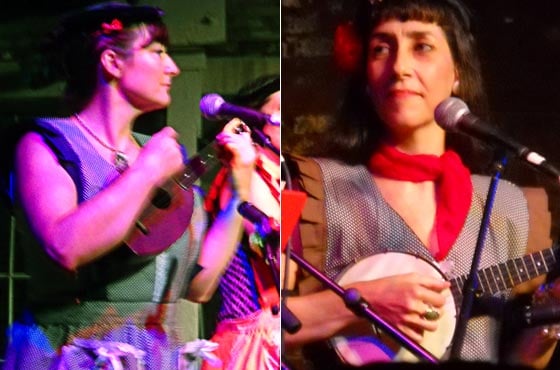 Or if the Boswell Sisters had been born 60 years later…

Or if “Pee Wee’s Playhouse” had a house band…

When not giving her tap shoes a workout, the perpetually perky Cousin Bunnie often spent her time on stage acting out the lyrics of vintage tunes (like Fanny Brice’s “Cooking Breakfast for the One I Love,” during which she also passed around a skillet full of bacon to the members of the audience) and like-minded original tunes (“Cookie Jar,” during which the crowd was rewarded with – that’s right – tasty cookies).

The music was often played on toys – toy piano, toy flute – but the musicianship was genuine, and the gals really nailed that sweet, sweet vocal harmony on ditties like “Whispering,” “Don’t Fence Me In” and “Bye, Bye Blues.”

While they revived various old-school standards – and a more contemporary cover like Josh Ritter’s “Stuck to You” – the gals actually write the bulk of their repertoire themselves. There’s the open marriage ode “The Ballad of Bill and Sam,” the snarky, flute-fueled bossa nova “Black Is the Smoke” and the twinkling, tantalizing ballad “Rooftops” (played on toy piano, ukulele, toy concertina and musical saw).

Saturday night’s tremendous thunder and lightning storm cut the outdoor performance a bit short, but the gals fearlessly regrouped in the museum’s main lobby to perform for another 20-25 minutes – without the benefit of a PA system – including the stunning, tour de force reinvention of Teresa Brewer’s zippy “Music, Music, Music” that incorporated belly dancing, opera, rap, cowboy songs, as well as references to Toni Basil, John Cage and Beyonce. My head is still spinning.

THE UKULADIES SET LIST
Cooking Breakfast for the One I Love (Fanny Brice)
Stuck to You (Josh Ritter)
Black Is the Smoke
Bye Bye Blues
???
Closed Door Blues
Don’t Fence Me In
Ghost Rider in the Sky
Now He Can’t Shoot His Pistol Anymore (?)
I’ll Never Find Another Like You (?)
The Ballad of Bill and Sam
Rooftops
Cookie Jar
???
INDOORS
Mean Old Man
Music, Music, Music
Kiss of Fire
ENCORE
Whispering