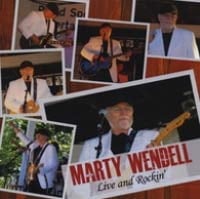 Marty Wendell is an old-school country music singer-songwriter. The Ticonderoga native recorded his first single, “Hey Hey Mama,” back in 1967. He’s toured with Johnny Cash and recorded at the legendary Sun Studios in Memphis.

Over the years, Wendell has explored various facets of his musical roots – from the acoustic folk of “It’s Just Me” to the gospel collection “What I Am Today” – while always remaining true to honest, straight-forward sounds of country.

But it also includes a number of Wendell originals like “’57 Chevy” and the strolling “When the Nighttime Comes Around,” as well as previously unrecorded tunes such as “Flea Bag Blues” and “Windin’ Down.”

This isn’t the super-cranked, revved-up brand of rockabilly that can sometimes be too hectic for its own good. No, Wendell and his six-piece backing band – led by son Sean Wendell on guitar and Jefferson Thomas on keyboards – keep it in the mid-tempo pocket for most of the album.

Admittedly, it gets a bit ragged here and there, but then after all, this is a live album, and it sounds pretty much exactly like what you’ll get at a Marty Wendell show – no fancy tricks, just straight from the heart country and rockabilly. Old school, indeed…

Marty Wendell plays a free show at the Bethlehem Public Library in Delmar at 7pm Wednesday, as the final concert in the library’s Evenings On the Green concert series.