Alejandro Escovedo has been knocking out one great album after another since his solo debut in 1992 – and he made some mighty fine albums before that with such bands as Rank & File and the True Believers.

Sadly, he still hasn’t been able to break out of cult status and into mainstream success. The small crowd of discerning folks at the Calvin Theatre last week didn’t care. They already knew that talent is no guarantee of success in the music biz. And they already knew about Escovedo’s towering musical talent.

Escovedo and his lean, mean power-trio of a band, the Sensitive Boys, stepped out on stage swinging for the fences with an amped-up, bristling “Always a Friend.” They concentrated on the new album, “Street Songs of Love,” early on, cranking it up for serious, no-frills rockin’ on “This Bed’s Getting Crowded” and the roaring garage-rock nugget “Tender Heart.” Throughout the night, guitarist David Pulkingham was nothing short of amazing.

The band switched things up for the middle section of the show, trading in sheer power for a more subtle musical approach and a more poetic lyrical tact on the aching requiem “Sister Lost Soul” (dedicated to Stephen Bruton), “Rosalie” and the gorgeous “Five Hearts Breaking.”

Escovedo blitzed through a few more muscular musical attacks – most notably the squalling, feedback-fueled “Chelsea Hotel ’78” – to wrap things up, and then returned to the stage with a pair of swaying, swaggering Stones tunes – “Sway” and “Beast of Burden” – for encores.

Canadian alt-country singer-songwriter Kathleen Edwards was the co-headliner for the show, but she wisely took the opening slot. Backed by a four-piece band that included new guitarist Gord Tough, Edwards settled into a primarily mid-tempo groove, although she cranked it up to rock out on the steamrolling “Back to Me,” and she brought it down to a more intimate folk-ballad level for the crowd-pleasing “Hockey Skates.”

“There’s two things I enjoy writing about,” Edwards revealed. “Canadian geography and lust.” She combined the two deftly on “Going to Hell,” one of several new tunes that she unveiled.

She also offered the biggest surprise of the evening, bringing out Justin Vernon of Bon Iver to fire up some electric guitar and vocal harmonies on the wistfully nostalgic “Mercury.” 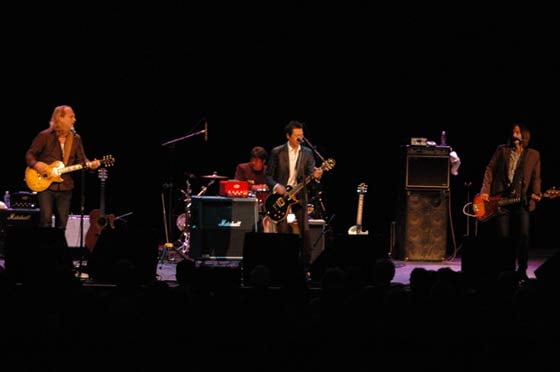