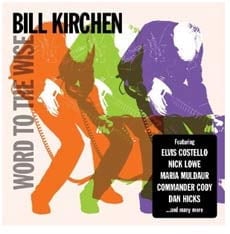 The fact that Titan of the Telecaster Bill Kirchen is still better known as a founding member of Commander Cody’s Lost Planet Airmen than he is for his outstanding string of solo albums seems criminal.

The original Lost Planet Airmen were indeed an exquisite combo, but that was so long ago. Meanwhile, Kirchen hasn’t churned out a single clunker since he began his solo career with his ’94 debut “Tombstone Every Mile.”

With “Word to the Wise,” Kirchen has fired up one helluva fine album, chockful of star-power-packing special guests, and if that’s what it takes to get some attention, well, who can blame him?

Elvis Costello digs in for some get-your-fingernails-dirty blues on “Man in the Bottom of the Well.” Nick Lowe and Paul Carrack pair up for some tight bluegrass harmonies on Merle Haggard’s bruised ballad “Shelly’s Winter Love.”

Kirchen shares the microphone for several well-chosen duets, too. He teams up with former Asleep at the Wheel vocalist Chris O’Connell for a broken-hearted rendition of one of Roger Miller’s finest songs, “Husbands and Wives.” Maria Muldaur sashays up to the microphone for a duet on the jazzy shuffle “Ain’t Got Time for the Blues.” And Dan Hicks and Kirchen swing through the title track as though it were a long-lost Hot Licks track.

And Kirchen’s old boss Commander Cody (aka Saratoga Springs’ George Frayne) spikes the tall-tale of “I Don’t Work That Cheap” with some honky-tonkin’ boogie woogie piano, recorded at Collar City Sound in Troy.

In the end, of course, this is Kirchen’s album, and his guitar playing is soooo right-on-the-money, as he reels off licks that are oh-so-sweet and always apropos to the song. His solos take intriguing, often surprising twists and never go on too long. The man is simply a mighty tasteful player, and that’s something the world sure could use some more of.

Bill Kirchen will be pulling in his Telecaster and rockin’ at the Ale House in Troy at 7pm on Sunday. Tix are $15.

Related story: Bill Kirchen, What Was the First Album You Ever Bought?