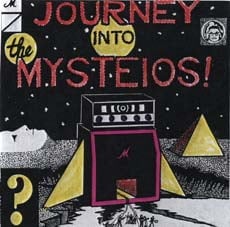 On their MySpace page, the Mysteios are right up front about what they do:

“Just be aware that we play rock, we play loud and we only play songs we like. We had a misunderstanding about this not too long ago at Colonie Ctr. and we are now banned from there..as if I give a SHIT. We like beer, rock and people of loose morals who still believe in American values.
LUV,
Mark, Manfred, Moe, Sam & Johnny”

After uncorking a raw, garage-rockin’ gem of a six-song debut disc last year (see our review of “Pronounced Misty-Ohs”), the Mysteios are back with a full-length effort that sprawls across 14 songs.

Bandleader-guitarist-vocalist Johnny Mystery has beefed up the band and the production values a bit this time around, but not enough to mess up the raucous, trance-inducing, three-chord, fuzzed-out beauty that is the Mysteios. The CD cover is still as DIY as you can get – Xeroxed and hand-colored.

The band time-trips their way through a handful of cover tunes, including a pair of Velvet Underground standards (“Waiting for My Man” and “Rock and Roll”), as well as the Zombies’ “She’s Not There” (which for some unbeknownst reason the band has reworked as “She’s Not Dead”).

And they revisit several tunes from “Pronounced Misty-Ohs,” too, including the sonic dance-party fave “Camel Walk.” And they wrap up the new disc with live renditions of “Smash the Sun,” “Stand Up” and the band’s anthemic theme song “We’re All Mysteios,” captured live in such Troy venues as Jimmy Barrett’s River Street Beat Shop and Artie Fredette’s late Positively Fourth Street.

I’m not sure that I’m on board with the lyrical sentiments of “Who Cares About the Arts,” but I can certainly dig a song that name-checks both Mojo Nixon and Willie Dixon.

So take a journey with the Mysteios, and you’ll find that getting there is more than half the fun.

The Mysteios play at the Judge’s Inn in Troy at 10pm Saturday, as part of the club’s grand opening weekend. Sharing the stage will be Mime Choir and the Jacknife Beat. (Related story) Admission is free.

A Few Minutes with… Katy Ashe of Last Daze

A Few Minutes with… The Great Pacific Garbage Patch

A Few Minutes with… Katy Ashe of Last Daze