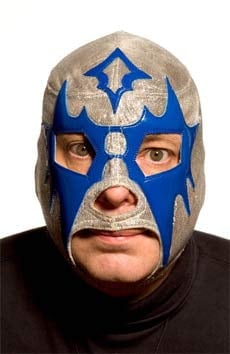 On his website, Los Straitjackets guitarist and founding member Daddy-O Grande (aka, Danny Amis) has posted some sad news, which reads in part:

“I have a very difficult announcement to make. I’ve had to cancel all upcoming shows due to having been diagnosed with cancer. The type of cancer I’ve been told I have is called Multiple Myeloma, cancer of the bone marrow.

“I hear it’s very difficult to treat and I won’t know what the treatment will be, or how long, until I’ve had more tests, but I will fight this the best I can. There are too many records I still want to make, and besides, I’m not going anywhere until after I figure out the whole ghost thing!

“I hope to be back out there to see you all again someday in person, I love all of you very much. Meanwhile, don’t miss any of the upcoming Los Straitjackets shows. They’ll have some cool surprises for you, and part of the money from those shows will help toward my medical bills.”

So while the Big C has forced Danny to the sidelines, fellow guitarist and Los Straitjackets bandmate (and Rensselaer native) Eddie Angel has recruited Greg Townson from Rochester-based rock band the Hi-Risers to fill in for Amis on their current tour. Townson will be known onstage as “Gregorio El Grande,” Danny’s long-lost cousin from Guadalajara on guitar.

Los Straitjackets will continue to honor their current bookings throughout the summer with the revamped band – including a free concert at Shepard Park in Lake George at 7:30pm on Wednesday.

(Related story: Eddie Angel, What Was the First Album You Ever Bought?)

Soundtrack to the Third Circle of Hell